MTN not to list on GSE with IPO – Kofi Yamoah 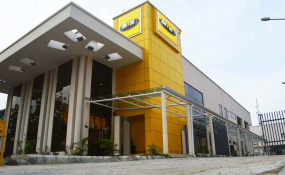 MTN Ghana may not be listing on the Ghana Stock Exchange (GSE) anytime soon even though it plans to cede a part of its operations to investors.

This is the indication from the managers of the Ghana Stock Exchange.

“MTN in its discussion is raising money from the public or doing a public offer but it will not list as a result of the public offer. For now the company is saying that it wants to do a public offer and remain unlisted,” the Director General of the GSE,” Kofi Yamoah told Citi Business News.

He added, “Per their 4G agreement, MTN was required to cede off 35 percent of its stake to the public but I am unable to tell whether they will cede totally at a go or they will cede incrementally.”

The offer by MTN to allow investors will also form part of fulfillment of obligations following the acquisition of the 4G spectrum license in 2015.

The company which spent US$67.5million to acquire the license which is valid for the next 15 years, is hoping to raise about 500 million dollars in order to offload 35 percent of its business in Ghana to locals.

The GSE boss further explained to Citi Business News the public offer may still suffer a delay until such a time that it gets the full complement of the Board of Directors of the Securities and Exchange Commission (SEC) and the National Communications Authority (NCA).

“MTN started talking to us about their intentions per the license agreement, the move was supposed to have been completed by the first quarter of 2017 but there were some hiccups,” Mr. Yamoah explained. As we speak we do not have the full complement of the Board of the respective institutions that is the Securities and Exchange Commission and the National Communications Authority (NCA) so even if the offer documents are ready, these boards need to be in place to sanction the public offer,” he asserted.

Appeals for MTN to list on the Ghana Stock Exchange has also been seen by some analysts of the market as conduits to facilitate the growth of the local bourse.

During the period, the telecom operator’s subscriber growth went up by 18.7% to 19.3 million.

Speaking to Citi Business News on the company’s performance Mr. Ebenezer Asante said innovation culture in MTN Ghana as well as investment in customer experience among others contributed to its performance.