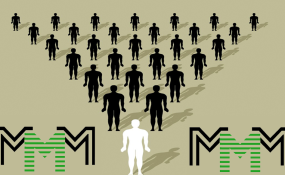 At least two persons have been arrested by the Police for allegedly luring some unsuspecting persons to subscribe unto the operations of MMM.

The arrest which was effected by the Tema Community One police over the weekend, follows a directive from the Bank of Ghana warning the public against doing business with the blacklisted ponzi scheme, MMM.

The police is yet to give any official update on the matter.

But narrating the incident to Citi Business News, the victim said his decision to alert the police was largely due to the public information on the illegality of MMM’s operations in Ghana.

“The gentlemen who approached my friend and I were not convincing in their product offering so I became suspicious and asked my friend whom I was with to ignore them. It was also because I had heard of the business in the news cautioning the public to be weary of the scheme,” he explained.

It is unclear when MMM’s Ghana operations commenced but checks by Citi Business News indicate its website is still functioning despite the caution from the central bank.

The directive has since been lauded by players in the microfinance space.

Commenting on the issue, the CEO of Capital and More Microfinance, Akosua Oduma Oppong Tawiah told Citi Business News she is confident the move taken by the Bank of Ghana will sanitise the financial space.

She added that this should avert any immediate incidence of panic withdrawals associated with reports of suspected fraud in the financial sector.

“Since the issue of the DKM came up, there has been a lot of media engagements with the various stakeholders to make sure that the public is sensitized on being responsible with our finances and in the way the public deals with non-bank financial institutions.”

“It is high time that we also have very solid regulations in that line to keep the sanity of the industry. MMM has come up but I am sure there will be more in the future; both legal and some of these ponzi schemes would want to undertake virtual business so we need to see an opportunity in terms of how to regulate that space because it is definitely going to catch up with us,” she opined.

In Nigeria, 3 million persons are reported to have lost 18 billion Naira to the ponzi scheme.

The country’s authorities have also had a tough time clamping down the operations of MMM.

But the Principal Consultant at the eCrime bureau, Albert Antwi Boasiako, believes the fight could be won with an effective collaboration with international security institutions like Interpol.

“In terms of going after them if they are not legally registered to operate as a business, Interpol system provides a good platform…there has been a bit of work and certain protocols that different countries could follow and bring the perpetrators to book,” he stated.

Meanwhile the Director of Communications at the Bank of Ghana, Bernard Otabil is confident the central bank will bring the perpetrators to book.