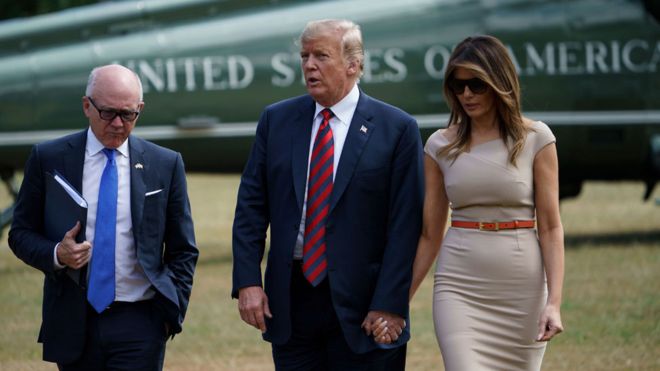 Donald Trump’s offer of a “quick, massive, bilateral trade deal” will not be possible if Theresa May’s EU withdrawal agreement is approved, the US ambassador to the UK has warned.

President Trump had previously said her Brexit proposal sounded like a “great deal for the EU”.
Woody Johnson told the BBC the UK was “in need of leadership” over Brexit.

A Downing Street spokeswoman said Mr Johnson recently said the UK was “the perfect trading partner for the US”.

“What I’m focusing on here is something the president has also said – that is looking forward to, and hoping, that the environment will lead to the ability for the US to do a quick, very massive bilateral trade deal,” he said.

He added it could be “the precursor of future trade deals with other countries around the world for Great Britain that will really take you way, way into an exciting future”.

“We’re still going through the stages of deciding exactly where the country is going,” said Mr Johnson. “If it goes in a way that allows these kinds of agreements to occur then I think that will be very positive in the president’s eyes.”
Asked if that would go ahead under the current proposed Brexit deal, which MPs are due to vote on in January, he replied: “It doesn’t look like it would be possible.”

He said ministers – and the prime minister – had to “measure the impact of all the other trade offs” and how different trade agreements would benefit the UK.

Mr Trump has said Mrs May’s deal could leave Britain unable to negotiate a free-trade agreement with the US.
Mr Johnson did not give more details about what such a deal would entail.

However, while the UK is either in a transition period after Brexit – or in a temporary customs union – it will not be able to implement its own free trade deals, with the US or any other third country.

Reacting to Mr Johnson’s comments on Brexit, the Downing Street spokeswoman said both the UK and the US had been clear that “we want an ambitious trade agreement and we stand ready to conclude such an agreement as a priority after we leave the European Union”.

Mr Johnson also said that he had been surprised by the “defeatism” felt in the UK over Brexit.

“All of the reporting looks back and it looks at a very static future, rather than an active British future – about solving problems, entrepreneurialism and taking advantage of opportunities and being very innovative,” said Mr Johnson.
“If you look back and try to project the past into the present and future, it’s going to be bleak.

“But you’re leaving out the great thing that Britain has to offer and that is all of the people and all of their efforts and their ability to solve problems. If you factor that in, I think the future is extremely positive, extremely bright.”
He added that it would be “great” if President Trump’s postponed state visit could take place in May, around the time of World War Two commemorations – if his schedule, and that of the Queen, allowed.