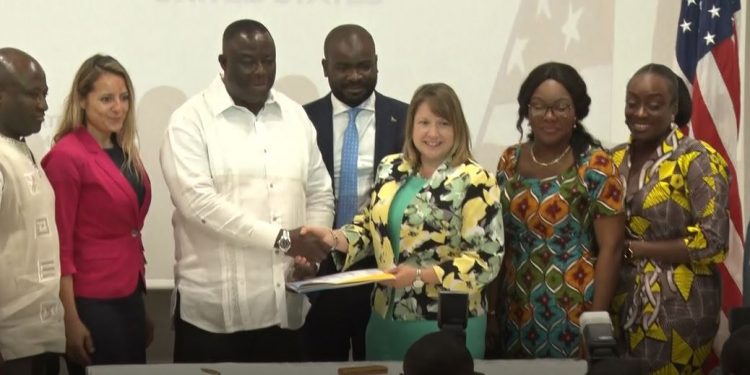 The Export-Import bank of the United States and the Ghana Export-Import Bank have signed an agreement to finance the export of US produced goods and services for Ghana’s “one district, one factory ” program.

The 300 million dollar loan facility from the US Exim bank will be given to qualified Ghanaian Small and Medium sized Enterprises (SMEs) operating under the government’s flagship program.

“We are going to work extremely hard and this is sort of the mid-term in terms of our efforts to stabilize the economy…The more significant issue is that the beneficiaries are going to be industries around the country, decentralizing and have people use the resources from where they are to be able to add value to that. The expectation is that we may eventually be able to take advantage of AGOA in a sense and send goods to the US,” he remarked.

The framework agreement, which is currently in effect, was signed earlier in April.

The parties that witnessed the signing were EXIM Executive Vice President and Chief Operating Officer, Jeffrey Goettman and the CEO of Ghana EXIM Bank, Lawrence Agyinsam.

Meanwhile US ambassador to Ghana Stephanie Sullivan said her outfit will continue to support the government’s initiatives.

Among the numerous interventions to enhance industrialization in Ghana by the NPP administration is the establishment of a factory each in all the districts across the country.

In a recent interview on Citi TV, Deputy Minister of Trade and Industry, Robert Ahomka Lindsay indicated that a hundred and eighty one factories are at various stages of completion.

Mr. Lindsay added, forty-five (45) factories are operational; a hundred and thirty six (36) are at various stages of completion.