The Board Chair of MTN, Ishmael Yamson, is backing the performance of the share price of the largest telecoms operator to bounce back having recorded a decline of about eight percent in the year-to-day value from 75 to 69 pesewas.

His assurances came after shareholders at the company’s AGM demanded the company improves its performance.

“When a country’s interest payments burden begins to grow, it affects the economy and subsequently impacts on areas like the stock exchange. I pray that going forward, we will be prudent in managing the economy and more cautious in adding more debt to the country’s debt portfolio because that has an impact on the confidence of investors,” he remarked.

Mr. Yamson, however, touted MTN’s sustained performance and was hopeful it should rebuild confidence among shareholders: “The company has to ensure that it manages its assets properly and to deliver strong profits and that is evident in our first quarter results for 2019.” he said.

In 2018, MTN’s profit after tax increased by five percent.

For the same period, the company equally increased its capital expenditure by ten percent; from GHS751.69 million to GHS825.19 million. 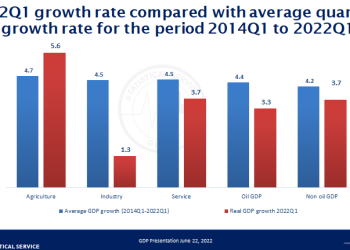 Ghana’s economy has grown by 3.3 percent in the first quarter of 2022. This is the slowest rate of growth...