US jobless rate at lowest since 1969

MORTON GROVE, IL - OCTOBER 06: A "Now Hiring" sign is displayed in the window of a retail store October 6, 2006 in Morton Grove, Illinois. The U.S. Department of Labor's monthly employment report released today shows a dip in both job growth and the unemployment rate in September. (Photo by Tim Boyle/Getty Images)

The US unemployment rate dropped to its lowest level for more than 49 years in April, according to official figures.

However, the fall was due to a large number of people – 490,000 – leaving the labour force during April.

The data also showed that the world’s largest economy added a stronger-than-expected 263,000 jobs during last month.

Wage data showed that average earnings grew at an annual rate of 3.2%.

Analysts said the figures indicated that the economy remained healthy, but was not running at a pace that might cause the US Federal Reserve to alter interest rates.

Hiring gains were seen in nearly all sectors of the economy during April.

However, there was little change in the numbers of involuntary part-time workers. The number of people working part-time because their hours had been reduced or because they were unable to find full-time jobs remained at 4.7 million. 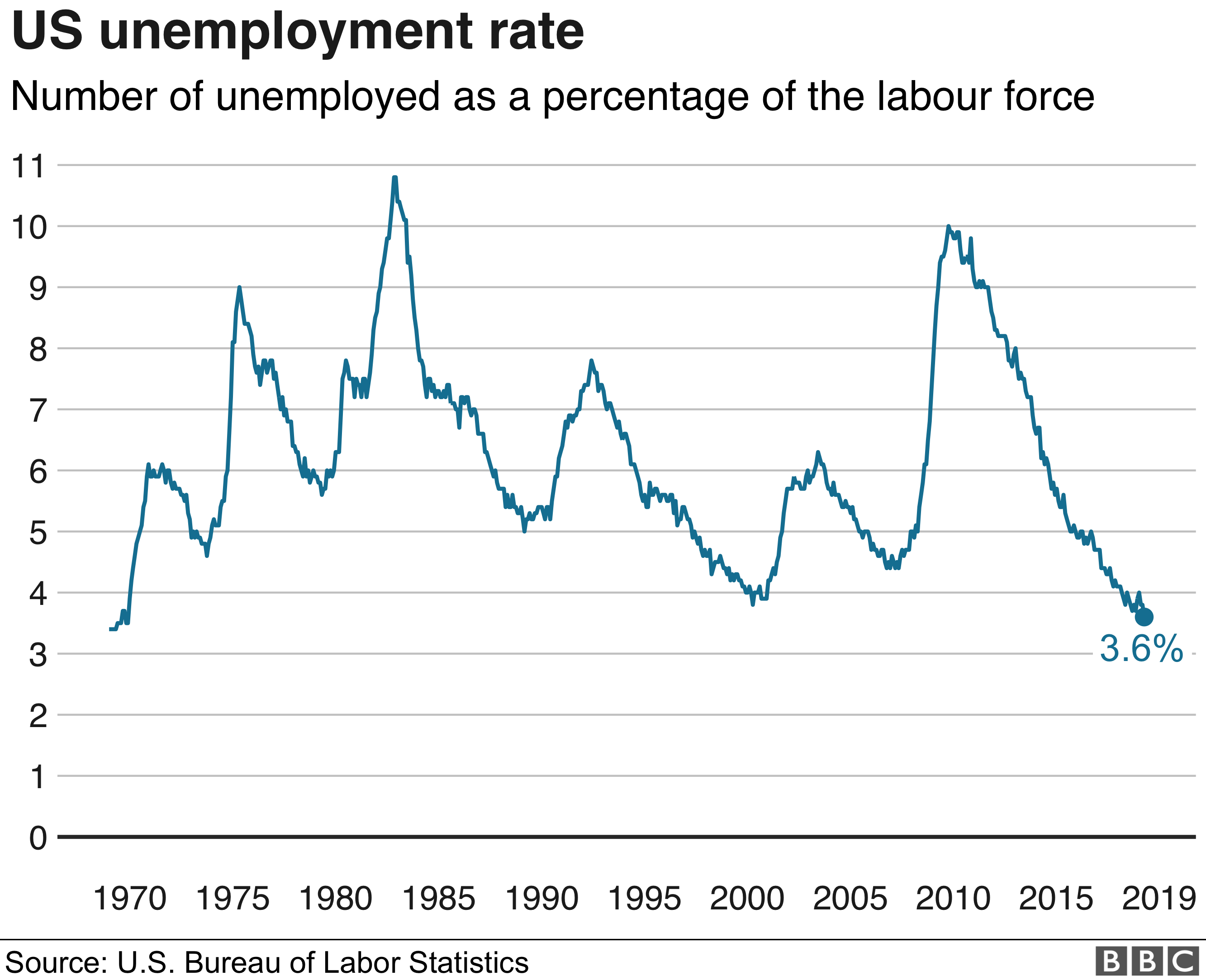 “What can continue, though, is the downshift in unemployment, and that means more power to scarce labour and faster wage gains in due course.”

He added that while there were no immediate implications to monetary policy, it would be possible that similar data in the future could “prompt something of a rethink at the Fed”.

Nancy Curtin, chief investment officer at Close Brothers Asset Management, said: “Unemployment is at a multi-decade low, the trade talks with China are progressing well, and Chinese stimulus is in place, which should boost global demand. All of this bodes well for the US economy continuing to build momentum.

”Despite the strong jobs growth, US inflation remains below the Fed’s target of 2%.”Business spending is going towards digital transformation rather than investment in labour, which is proving deflationary,” said Ms Curtin.

“What this means for expansion is unclear, but so long as [US Fed chairman] Powell remains pragmatic and flexible with his policy the US is in a good position for the second half of the year.”‘

The US Federal Reserve indicated earlier this year that it would not change rates for the rest of 2019.

On Wednesday, the Fed voted to hold interest rates, keeping borrowing costs at between 2.25%-2.5%.

A day earlier, US President Donald Trump had tweeted that the Fed should reduce rates by 1% to help the US economy “go up like a rocket”.