in Banking And Finance, Business, Europe 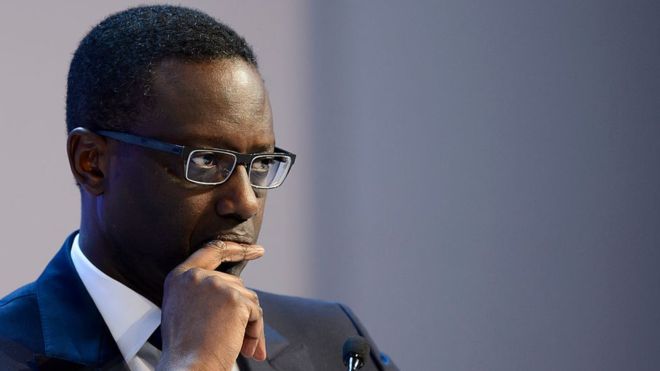 Credit Suisse chief executive Tidjane Thiam has resigned amid a power struggle which followed a spying scandal at the bank.

He is stepping down after five years at the Swiss bank just months after it emerged that two former employees had been placed under surveillance.

Mr Thiam said he did not know the spying was taking place,

Credit Suisse’s board backed chairman Urs Rohner for leading it “commendably during this turbulent time”.

The bank’s board unanimously accepted Mr Thiam’s resignation on Friday.

This week a number of shareholders in Credit Suisse such as Harris Associates had backed Mr Thiam to stay on as chief executive and for Mr Rohner to go.

And on Wednesday, Mr Thiam posted a smiling photo of himself on Instagram with Credit Suisse’s executive team.

However, the bank’s board has thrown its support behind Mr Rohner.

Credit Suisse’s lead independent director Severin Schwan said: “After careful deliberations, the board has been unanimous in its actions, as well as in reaffirming its full support for the chairman to complete his term until April 2021.”

Mr Thiam will leave on 14 February and is being replaced by Thomas Gottstein, who is head of the bank’s Swiss business.

Relations between the chief executive and chairman had been increasingly strained following the spying scandal.

In a statement, Mr Thiam said: “I had no knowledge of the observation of two former colleagues.

” It undoubtedly disturbed Credit Suisse and caused anxiety and hurt. I regret that this happened and it should never have taken place.”

Mr Thiam has had an illustrious and varied career. The French Ivorian studied in France and worked in management consultancy before serving as Ivory Coast’s Minister of Planning and Development, until a military coup led to him being placed under house arrest.

While he had initially praised and promoted Mr Khan, there were reports a personal animosity had developed.

This intensified after Mr. Khan redeveloped a property near Lake Zurich neighbouring that of his boss.

Media reports suggested there was an altercation between Mr Khan and Mr Thiam’s girlfriend at a cocktail party held by the chief executive at his home, over trees planted on Mr Thiam’s property.

Shortly after that Mr Khan announced his departure from Credit Suisse.

It later emerged private detectives were hired to track him due to fears he might poach clients when he started work at UBS.

Mr Khan, after noticing he was being tailed, had confronted the person observing him.

Implementation of AfCFTA must not compromise standards – GSA

Gov’t to regulate importation of ‘second-hand’ and ‘accident’ vehicles

Gov't to regulate importation of 'second-hand' and 'accident' vehicles