All AfCFTA functions transferred from Ethiopia to Ghana 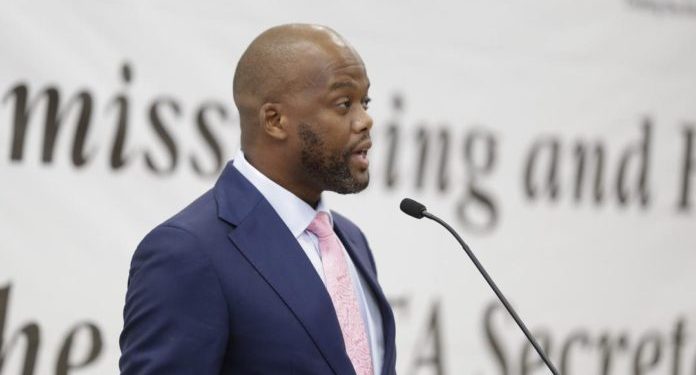 Secretary-General of AfCFTA, Mr. Wamkele Mene has revealed that the African Union has transferred all functions related to the African Continental Free Trade Area (AfCFTA) Agreement from Addis Ababa, Ethiopia to Accra, Ghana.

According to him, the decision which was taken at the 13th Extraordinary Session of the Heads of State and Governments, positions Ghana as a gateway to trade and investment in Africa.

Speaking at a Business Forum at the commencement of AfCFTA Trading in Ghana: Implementation Arrangements, Mr. Wamkele Mene said the AfCFTA Secretariat in Ghana is not only a symbol of confidence in the country but also indicated that Ghana was the commercial and trade centre of Africa.

“The Secretariat gave practical meaning to Ghana’s long standing ideals to Pan-African. I am truly proud to be part of the historic journey that Ghana has begun to pioneer for the African continent,” he said.

“The Secretariat was determined to eliminate tariffs and non-tariffs barriers on trading in Africa, because African countries were collectively undertaking commitments to liberalise significantly by eliminating tariffs by 97 percent,” he added.

Mr. Mene commended government and the people of Ghana for their commitment and dedication to the implementation of the Agreement.

He said by organising the forum, Ghana continued to lead and to affirm her commitment to an integrated market on the African continent.

He further noted that, “54 countries out of 55 have signed the Agreement with 34 depositing their instruments of ratification with Nigeria being the 34th country to conclude it on the morning of December 5, 2020.”

Ghana was one of the first countries to sign and ratified the Agreement.

He said January 1, 2021 was a historic day for the African continent and that day the Continent took a step closer to a vision of an integrated Africa and boosting intra-African trade and eventually creating a single market.

“We have embarked on a journey of making the AfCFTA work for Africa and make it work for small businesses, women in trade and young Africans,” he added.

On his part, Minister of Trade and Industry, Mr. Alan Kyerematen, stated that the Ministry has conducted a series of sensitization and orientation programmes for the private sector to take advantage of opportunities.

He said the Ministry had established the National Coordination Office to provide management support for the implementation of the programme.

“We have also developed a National Action Plan or Programme, which provides detailed activities to support the private sector,” he said.

Mr Kyerematen said they had also under the direction of the President installed an institutional support structure to ensure the success of the programme.

The Minister said at the base of this structure was the technical working groups to assist the private sector in various areas of implementation.

AfCFTA is an agreement among 54 African countries with an estimated potential of lifting 30 million Africans out of extreme poverty, boost Africa’s income by $450 billion by 2035 and also increase Africa’s exports by $560 billion.

Cost of fuel to go up marginally in January - IES predicts