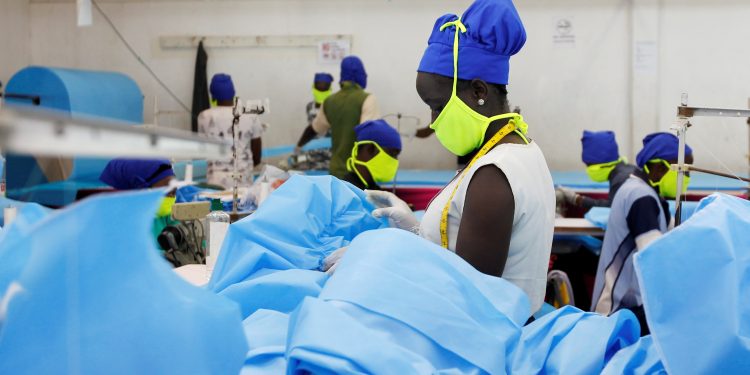 The latest COVID-19 update announced by Ghana Health Service as of January 18, 2021, shows that Ghana has recorded 351 new COVID-19 cases. This brings the country’s total active case count to 1,924.

Five more persons have succumbed to the virus pushing the death toll to 352. Also, 53 persons are in severe conditions.

Per the latest data, there has been a surge in the number of infections.

This has been largely attributed to the laxity in the adherence to safety measures such as the wearing of nose masks, social distancing and other safety measures meant to curtail a spread of the disease.

A recent survey conducted by the Ghana Health Service showed that only 14.4 percent of the population in the Greater Accra Region wears face masks.

These recent trends are in effect, taking a toll on the patronage of nose masks, which were in high demand in March and the following months, when the first cases of the disease were announced.

But as part of efforts to curtail the current surge of in COVID-19 cases, President Nana Addo Dankwa Akufo-Addo, while delivering his 22nd COVID-19 update to the nation has ordered the Inspector General of Police, Mr. James Oppong-Boanuh, to strictly enforce the mandatory wearing of nose masks among the populace.

What does this directive mean for dealers in nose masks in the Central Business District of Accra.

“I believe before the President’s directive for the mandatory wearing of nose masks, business was good. Currently, sales is booming because everyone is buying nose masks, especially for their children. So, there is even a shortage of nose masks for children. As a result we are selling more of the face masks for adults,” Afua Kraba, a nose mask seller said.

“Since the President announced the mandatory wearing of nose masks, a lot of people are purchasing more nose masks. The reopening of schools is also a contributing factor to the increased sales but there is a shortage in the nose masks for children. You can hardly get some in the market. But generally, sales is booming. More people come to ask and purchase for the adult ones,” Bismark Buabeng, another nose mask dealer stated.

Though some of these retailers admit that the sale of nose masks has started picking up, they are calling for a regulation of the prices as government’s directive has caused an increase in prices.

“Anytime the President gives a new directive on the mandatory wearing of nose masks, it results in an increase in prices. Now a box of adult nose masks is selling for GHC 25 and GHC 30. Previously, it was sold for GHC 20. But today the prices have increased again. For instance, the nose masks for children were selling for GHC 40 but since the announcement was made, it is now selling for GHC 80 and GHC100.

We are calling on government to regulate the prices. Currently, those on the market are not medicated. I don’t think we have people who check the nose masks. They are just selling it. So, who is regulating these things? Some of them come with unbearable scents that make it difficult for you to breathe. So, we don’t know which of them is good or bad,” Celestina Amoah lamented.