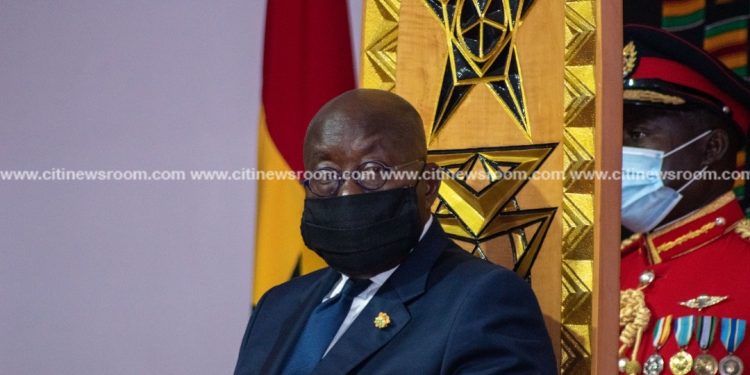 The President, Nana Akufo-Addo says his government will work hard to ensure that the country’s economy is able to create many jobs to employ especially the teeming unemployed youth.

He disclosed this in his inaugural address in Parliament on January 7, 2021.

Nana Akufo-Addo said his government in its first term has ensured that the country’s economy has been strengthened and attracting major international businesses.

He said the presence of such global businesses is an indication of the economy’s buoyancy.

He added that the government will, during the second four-year term place a premium on value addition to employ more young people and give them the opportunity to improve their living standards.

“Ghana remains one of the most attractive destinations on the continent for direct foreign investment. The presence in the country of some of the world’s largest conglomerates attesting to this fact. Establishing a strong economy, undergoing a structural transformation with value-added activities which will generate jobs for our young people and enhance their living standards will be the main preoccupation of my second term,” Akufo-Addo said.

The President noted that his government will continue to roll out social interventions that will provide equal opportunity for development for all Ghanaians.

In highlighting the government’s Free SHS programme, he said the government believes in the tenets of social justice and is working hard to make sure that financial considerations do not determine the fate of any Ghanaian child.

Meanwhile, Nana Akufo-Addo says the year 2021 will continue to be the ‘Year of Roads’ for his government.

The focus he says will be to continue to extend and expand the road infrastructure in the country.

He expressed optimism that undertaking such development will bring to an end the cries of Ghanaians for better road networks and quality road infrastructure.

“Our roads are being constructed at a faster pace than before, and yes, there are still many more kilometers to construct. We defined last year as the year of roads. This year will be the second year of roads as we continue with our focus on dealing with the deficits of our road infrastructure,” he said.