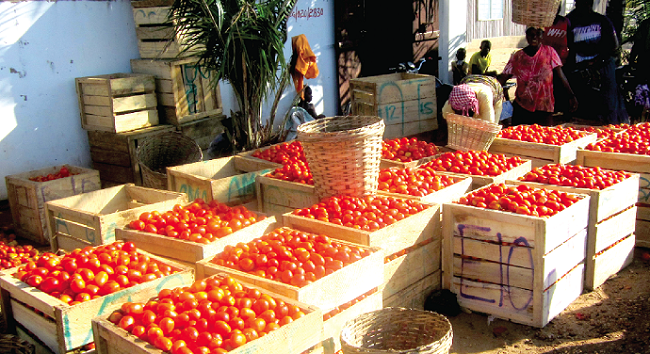 The Inspector-General of Police, James Oppong-Boanuh has directed the deployment of armed police officers to provide escort services for tomato traders and transporters who travel to neighbouring Burkina Faso to import the commodity.

This comes after the Tomato Traders and Transporters Association declared a strike because of lack of concern for the security of its members.

It had complained of attacks on its members by robbers on the Ghana-Burkina Faso highway.

There were fears the strike could lead to a tomato shortage.

The Association said seven of its members have been robbed and shot in less than three weeks while returning from Burkina Faso with tomatoes.

Two of them, however, died following the attacks forcing traders and transporters to embark on a strike over security concerns.

The Deputy Ashanti Regional Police Commander, DCOP David Agyeman Adjem, who met the traders on behalf of the Inspector General of Police in a Citi News interview assured of the Police’s support.

“The IGP sent me through the Regional Commander to give them a message… the IGP wants me to assure them that he has already had some men deployed on that highway and that we should also give them escorts as they go on the highway.”

The leadership of the Association welcomed the intervention and said it will meet to decide on when to call off the strike.

“I am very happy today because the rate at which the were robbing us was very unprecedented,” Eric Osei Tuffour, the National Chairman of the Association, said to Citi News.

He added that following a meeting with the police in the next two or three days, “the escort will take off, and then we’ll call off the strike action.”