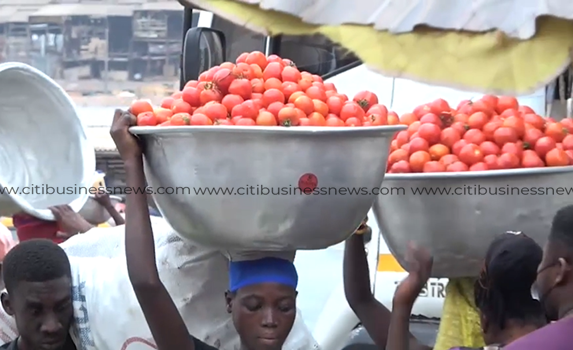 Tomato trade in Ghana can once again go on smoothly. This is because the tomato traders and transporters association has called off the strike that they embarked on from Sunday, February 7th, 2020.

The association had on several occasions, complained of attacks on its members by robbers on the Ghana-Burkina Faso highway, but efforts at calling for help proved futile.

But after the Inspector-General of Police, James Oppong-Boanuh directed the deployment of armed police officers to provide escort services for them, the leadership of the Association decided to call off the strike.

The National Chairman for the Ghana National Tomato Traders and Transporters’ Association, Eric Osei Tuffuor speaking to Citi Business News noted, “Five days ago, the Ashanti Regional Police Command called me into his office. After the meeting, we called for a press conference, and he gave us the assurance that the IGP has instructed them to escort our convoy to Paga border. So we started three days ago. About 100 trucks were escorted to Paga border.”

“…Because of the quick response by the IGP, we decided to call off the strike action. So now tomato is coming in quantities to various regions within the country.”

The strike, which began on Sunday, February 7, 2021, according to the Association, was due to the silence of the Ministry of Food and Agriculture and other authorities on robbery attacks on their members on the various routes when going in for the produce from Burkina Faso as well as when returning to their various depots.

According to the group, seven of its members had been robbed and shot in less than three weeks while returning from Burkina Faso, leading to the death of two of the drivers.

There were fears the strike could lead to a tomato shortage. Just within the week that the Association laid down their tools, the price of the commodity shot up on the market.