in Business, Top Stories
Share on FacebookShare on TwitterShare on Whatsapp

Members of the Sea-Freight Pineapple Exporters of Ghana (SPEG) are angry over what they call “unnecessary interferences” in their business by the Ghana Ports and Harbours Authority (GPHA).

According to the Association, these interferences have led to an exorbitant increase in cost of operations to the tune of $245, 796 and 283,809 in 2019 and 2020 respectively which could potentially cripple their business.

Even more bizarre, they say is the failure by the GPHA to renew their licenses for them to operate.

At an emergency meeting, the members of the Association issued a resolution demanding an immediate renewal of their licenses to enable them export their produce to the international market.

President of SPEG, Mr. Solomon Benjamin, insisted that if the GPHA fails to renew their stevedore and shore handling licenses by March 31, 2021, they will be forced to dump their fruits at the Ports or divert their cargo to the port of Lome, Togo, for onward shipment to the international market.

He is also demanding that GPHA must also fully refund the increased cost of operations incurred to the Association’s members. 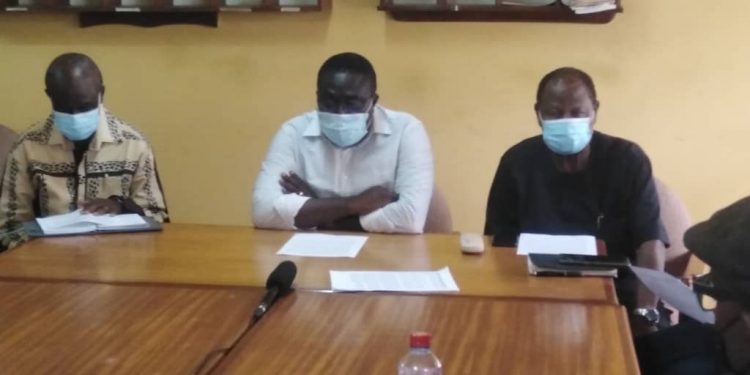 The resolution comes hours after Fruit Terminal Company, a group to which SPEG belongs, issued a petition to Parliament in support of the approval of the Agric Minister designate Dr. Afriyie Akoto, who had been accused of abrogating a contract which could lead to a $50 million judgment debt.

Mr. Solomon Benjamin insists the claim against the Agric Minister and the threat of judgment debt where hollow and of little effect.

He also stated that the threat by SPEG to move their consignment to Lome could potentially affect Ghana’s trade policies at a time when government is leading efforts towards the African Continental Free Trade Area (AFCTA).

Taking journalists through the issues, Mr. Solomon Benjamin said the Association is “disappointed at the slant which was given to the issue of the supposed payment of judgment debt” which has been a subject matter in Parliament and which nearly marred the approval of the Agric Minister designate.

According to him, the Kufuor government signed a Management Agreement (MA) with the Exporters of horticultural products by sea in order to promote government’s initiatives including the Horticultural Exports Industry Initiative (HEII).

In addition, “the Ministry of Food and Agriculture (MOFA) took a loan from the World Bank to rehabilitate the existing Shed 9 at Tema Port into a modern fruit export terminal which was completed in 2006.

Two years after completion and after several deliberations as to the management of the facility, government with the consent of the World Bank agreed to allow exporters to manage the facility to ensure that cost to exporters of using the facility were as low as possible in keeping up with international best practice and to complement their huge investments in plantations and the thousands of jobs created.

According to him, the role of GPHA in this arrangement was to provide FTC with stevedore and shore handling license to operate and to apply the concessionary rate of tariff agreed to by GPHA with MOFA as contained in the MA.

Mr. Benjamin said to ensure a smooth operation of the agreement, the exporters contracted Supermaritime Company Limited (SMT), a forwarding and clearing company to do the stevedoring and shore handling on their behalf for a period of one year.

“FTC therefore had an arrangement where the equipment and personnel of SMT were leased to FTC at a negotiated fee per pallet which allowed SMT to handle fruits at the port using FTC’s stevedore license,” he explained.

He expressed surprise that GPHA went behind them to sign agreement with SMT to perform the same task.

“…After investigation it emerged that SMT had formed a rival company as far back as 2014, called Fruit and Export Terminal Ghana Limited (FET) with GPHA as a 25% shareholder and had allegedly granted to themselves a 25 year concession agreement to do essentially what Government had mandated FTC to do and more” he stated.
This new company in cahoots with GPHA had given themselves an exclusive handling of horticultural products at the port of Tema which Mr. Solomon insisted could not have been possible because FTC still has exclusivity under the MA to handle all horticulture produce going through Shed 9 the MOFA facility.

As a result GPHA has been reluctant to renew the licenses issued to FTC on a regular basis.

He said the new arrangements by GPHA had increased the cost of exportation because they were paying more per pallet than they used to pay in the past which is crippling their businesses.

After series of protests, government, through the Agric Minister designate decided to restore the previous arrangement under the MA and to ensure sanity at the point of export.

This action Mr. Solomon said cannot lead to a judgment debt to a company, whose shareholders included the GPHA.

He said if SMT and its allied company want to be players in the horticulture business, they can set up their own farms, harvest their commodities for export, rather than seek to profit from the sweat of the exporters, most of whom are farmers.

Mr. Solomon indicated that if the status quo is not restored, government’s flagship policies, including Planting for food and jobs, One District, One Factory will all suffer because the export arm of the policies will be severely hampered by the activities of SMT.