Our MD must be sacked; he has no vision – ECG staff demand

The Junior and Senior Staff of the Electricity Company of Ghana (ECG) are demanding the immediate removal of their Managing Director, Mr. Kwame Agyeman-Budu from office over alleged mismanagement of the company.

The staff said they took the decision at a joint National Executive Committee held last Friday at the ECG Training School in Tema.

They also alleged that several petitions to Mr. Agyeman-Budu to involve its rank and file in revenue mobilization since 2020 have been ignored.

The workers claim the MD’s continuous stay at post will collapse the electricity distribution company because to them, “he is grossly deficient when it comes to matters relating to administrative and corporate governance”.

They also accuse their MD of breaching procurement processes.

“A clear example is the award of contracts of some Six (6) substations were the recommendations of the evaluation committee were sidestepped and awarded to other companies,” the Junior and Senior Staff Union said in a statement.

“The Union decries the alarming rate at which the company’s technical and commercial losses are galloping. A conservative estimate puts the current system loss figure at over 34% as at February 2021, and there are no concrete strategies in place to bring them down in the short and medium-term,” the statement added.

They have therefore warned that if their concerns are not addressed by Friday, April 23, 2021, they will advise themselves.

Below is the full statement from the ECG workers:

A joint National Executive Committee (NEC) after its meeting on Friday, 9th April 2021 at the ECG Training Centre, Tema resolved as follows:

Added to this is the non-payment of legitimate deductions made from staff salaries, which has become severe during his tenure. Altogether, the backlog of outstanding staff deductions to the Provident Fund, PUWU Mutual Funds, Credit Unions, Life Insurance Schemes etc. is estimated at over Seventy Million Ghana Cedis (Gh¢70,000,000.00) as at March 2021.

Please take note that if by the close of work on Friday, April 23rd, 2021, there is no appropriate action, we shall advise ourselves. 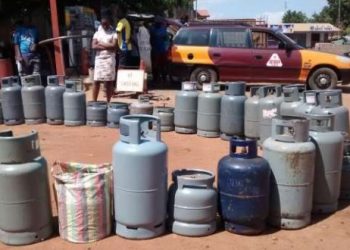 The LPG marketers Association of Ghana is assuring consumers they would get products to buy from the retail outlets of...