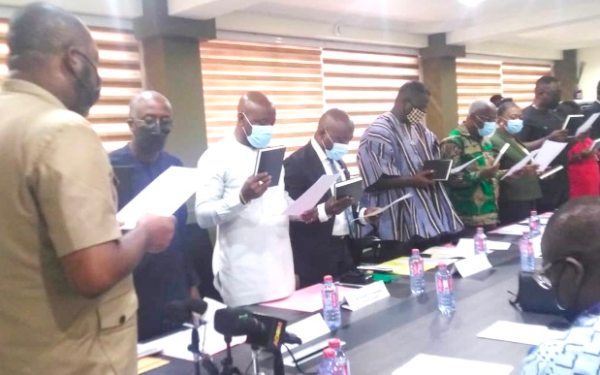 At least 10 percent of electricity produced by the Electricity Company of Ghana and consumed by the public cannot be accounted for, the Minister of Energy, Dr Matthew Opoku Prempeh, has revealed.

The situation, he said, meant that for every 1,000 megawatts of electricity sold, 100 megawatts is unaccounted for, insisting that a company with such a profile could not make any profit.

Addressing a newly constituted board of the Electricity Company of Ghana (ECG), Dr Prempeh said the company ordinarily should be swimming in cash.

“But what do we find? The ECG is always in debt,” he said, and charged the new board to find a solution to the problems confronting the company.

The seven-member board, wholly nominated by the government, is under the chairmanship of Mr Keli Gadzekpo, with Mr Kwame Agyeman-Badu as the Managing Director.

Dr Prempeh said every government in the last 20 years had had challenges with the management of the ECG.

“Whether it was under President Kufuor or President Mills or President Mahama or President Akufo-Addo, each and every one of them had had his discomfort with the ECG. So, each one of the past four Presidents had at a particular time tried to bring the ECG under private management,” he said.

Dr Prempeh explained that no government would be comfortable with the kind of money the ECG was losing, adding that the attitude towards work and accountability issues were key for the success of any institution.

Comparing the ECG with the Ghana Oil Company Ltd (Goil), the minister said even though Goil was in stiff competition, it was still making profit.

Dr Prempeh expressed concern that the ECG, although a monopoly that should have been swimming in cash, did not post any profit, stressing that something different must be done to turn the fortunes of the company around.

“This is because the chunk of the losses were in the area of commercials and which is what the ECG is actually known for — selling energy. And if you are so bad at selling, then the onus is on the board to ensure that things change,” he added.

Dr Prempeh expressed his desire to succeed with the current board under the chairmanship of Mr Gadzekpo, insisting that the company could not continue to do the same things and expect a different result.

He pledged to work with the current board to achieve the required targets through close collaboration and hard work.

The board chairman thanked the President for the trust reposed in the members.

He said as a board, they were aware of the enormous collective responsibilities and gave the assurance the board would work closely with the minister to accomplish the task ahead of them.