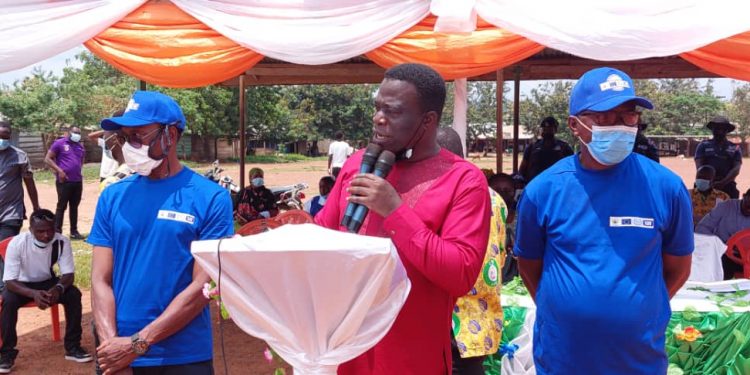 The Minister of Employment and Labour Relations, Ignatius Baffour Awuah says Ghana has no data to dispute  reports conducted by foreigners of child labour in the cocoa sector.

This follows reports from the US Department of Labour that Ghana’s cocoa industry is under threat following a rise in Child Labour cases.

Speaking after a day’s tour of some farming communities in the Bia West District of the country to assess the number of children who were directly involved in harmful work relating to cocoa production, Ignatius Baffour Awuah said most Child Labour reports are compiled by foreigners who do not appreciate the socio-cultural systems concerning work in the country.

According to him, the involvement of children in cocoa production is practically not prevalent since farmers really understand the issues of Child Labour and thus, do not allow their children to do hazardous work on their cocoa farms.

“Most of the surveys are conducted by foreign nationals who perhaps do not even understand our cultural setting and family values. So they come and they see anything, they meet a child, interview the child and base on that get their conclusions. But unfortunately because we do not have our own data as a nation when they turn out the numbers and we identified this number of children involved in cocoa production or child labour we do not have counter figures to be able to argue out.

Fortunately we have just concluded a national census and I want to believe that perhaps the national census will have figures which will be nationally representative enough so it will help us to be able to compare with what other stakeholders have will turn out,” he said.

The Country Director for International Labour Organisations, Akua Ofori Asumadu noted that, no international community is ready to buy any product that has children’s involvement in production. Even though she is happy about the development in the area, she believes a lot more needs to be done to totally eradicate child labour in Ghana

“Now the international community is not going to touch a produce, such as cocoa, bananas, oranges, that is supported by child labour. So, we actually decided to come into the districts and communities, and to the grassroots level to find out if it is really what it is. But fortunately, I’m quite happy to say that we did not actually notice child labour. We’ve been to two cocoa communities and we did not see any engagement of child labour. We interviewed some and they actually said their children do not engage in such activities but it doesn’t end there.

We are not saying child labour is completely eradicated in Ghana. There is a lot of work to be done but we did not see child labour in the cocoa areas. Of course, we have not been to all the other regions in Ghana,   so it will be very simplistic on my side to conclude that there is no child labour in cocoa,” she said.

The tour was organized by the Minister For Employment and Labour Relations, the International Labour Organization and the National Steering Committee on the Elimination of Child Labour.