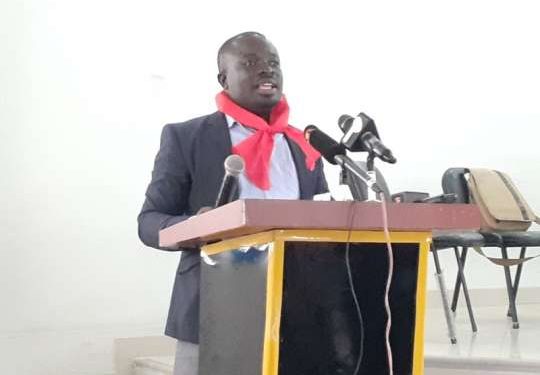 The Coalition of aggrieved customers of Gold Coast Fund Management has issued a one-month ultimatum to government to pay their locked-up funds or face their wrath.

According to them, government has unjustifiably delayed their payment after their funds were locked up three years ago.

Addressing the media in Accra, the spokesperson of the group, Charles Nyame appealed to the government, to as a matter of urgency direct the Finance Minister to advance payment to customers of the defunct institution.

“We wish to call on the vice president, His Excellency Dr. Mahamadu Bawumia who doubles as the head of the economic management team and a potential presidential aspirant of the NPP for the 2024 presidential elections to as a matter of urgency give directive to the Finance Minister to advance payment to customers based on the GHS5.5 billion allocation made in the 2021 budget, if indeed he means well for the poor Ghanaian pensioners who are dying daily due to the crisis we find ourselves,” he said.

It has been over three (3) years now that our funds got locked up with GCFM which is a government regulated institution under the Asset management sector regulated by Securities & Exchange Commission (SEC). The locked-up of our funds was mainly due to Government’s policy of a financial sector clean-up in Ghana initiated in 2018.

It is however unfortunate that we the ordinary citizens are now made to bear the brunt of a government decision for the past three years in such a dastardly manner. You can imagine how we have been surviving for all these years, especially the pensioners and sick persons among us. Pensioners, alone among us who have their investment locked up till date, form more than 70% of our membership. The following are reasons for which we believe government has been unjust and unfair in the handling of this crisis:

• A bailout package as we all know is distinct from a liquidation order being sought in the court, therefore we wish to call on the government to proceed to commit the 5.5billion budget allocation made in the 2021 budget for payment of fund management customers to pay us our money and stop hiding behind an alleged challenge in the securing of a liquidation order from the courts as an excuse. It is difficult to understand how the government and SEC boss Rev. Ogbame Tetteh will confuse a bailout to a liquidation order. There is certainly no connection between the two if not for unjustifiable reasons. Ladies and gentlemen of the media, as we are all aware, GN Savings and Loans & UniCredit were and are in court contesting the revocation of their license yet customers of these institutions have been paid their locked up funds in full by the receiver using the government bailout package. Why then are we being denied the opportunity to receive our payment in full even though the

Government made a bailout package allocation of 5.5 billion in the 2021 budget for that purpose, which allocation was subsequently approved by the parliament of Ghana. We are therefore unable to comprehend why Rev Ogbame Tetteh in his last press conference held in April 2021 should be telling the Ghanaian public that they are ready to pay all of our funds to us but for the liquidation order they are seeking in court. This assertion by the good Reverend is very misleading and a calculated ploy to deny customers of their funds. We, therefore, wish to call on Rev Ogbame Tetteh to resign his post or be sacked by the president since he has failed to work in the best interest of the ordinary customers by offering the wrong advice to the executive on our issue.

• It will however interest you all to know that this supposed court case which the government and SEC claimed they are interested in knowing the outcome before making payment to us, have been called on three different occasions in the commercial court this year alone but the Attorney General Department and SEC failed to show up in court for reasons best known to them. The question we are therefore asking is that if government claimed they are indeed interested in this court case which will enable them to pay us our funds, why then is the government’s legal representative failing to make representation in court anytime the case is called. This is a clear indication that the SEC and government are not willing to help alleviate the sufferings of the poor Ghanaian pensioner.

We consider the posture of SEC and the government as a mere attempt to cover up so as to deny us of our funds. We wish to call on the vice president, His Excellency Dr. Mahamadu Bawumia who doubles as the head of the Economic Management team and a potential presidential aspirant of the NPP for the 2024 presidential elections to as a matter of urgency give directive to the Finance Minister to advance payment to customers based on the 5.5billion allocation made in the 2021 budget, if indeed he means well for the poor Ghanaian pensioners who are dying daily due to the crisis we find ourselves. Ladies and gentlemen, we are sorry to announce to you that over Forty-Nine (49) of our members who are pensioners have died between January 2021 to date and still counting. These

We wish to also use this medium to call on the Parliament of Ghana to file an urgent question to invite Rev. Ogbame Tetteh and the Finance Minister Ken Ofori Atta regarding these issues as we have articulated in the above narrations as we have already petitioned them on these same issues before they rose. We are also calling on well-meaning Ghanaians such as the Christian Council, the Catholic Bishop Conference, the Chief Imam, the Pentecostal & Charismatic Council, the Asantehene and all CSO’s in the country to intervene in the distress situation we find ourselves in respect of our locked-up funds. Since any further delays in the payment of our locked-up funds will lead to more loss of lives of our members.