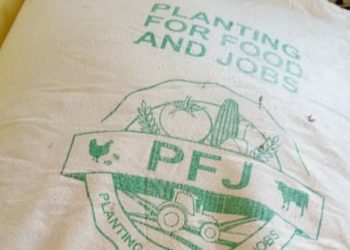 The Peasant Farmers Association says the government is employing a delayed approach in settling debts owed fertilizer suppliers in the country.

This comes after the Minister for Food and Agriculture, Dr. Owusu Afriyie Akoto, told Parliament on Thursday, August 5, 2021, that GHS260 million had been released to pay fertilizer suppliers under the Planting for Food and Jobs programme.

Many farmers have for several months now complained about the shortage of fertilizer, which they say has been hampering their work.

According to the sector Ministry, this situation, among other things, was caused by difficulties in paying companies contracted to distribute the products, due to the COVID-19 pandemic.

But on Thursday, the government of Ghana, through the Minister of Agric, announced that over GHS 260 million had been released for the payment of arrears owed fertilizer companies from May to July 2021.

Dr. Afriyie-Akoto, made the announcement in Parliament in a response to an urgent question by South Dayi MP, Rockson-Nelson Dafeamekpor.

Dr. Afriyie-Akoto explained that the funds released comprised an amount of GHS176,631,445, but the actual payment made to the companies thus far was GHS73.8 million, which he said was being processed by the Ministry of Food and Agriculture through the GIFMIS system.

He said the payment represented 44 percent of the total debt of GHS587,876,784 owed to all the fertilizer companies that supplied fertilizer to all the farmers under the Planting for Food and Jobs campaign.

The Peasant Farmers Association, however, are not happy about this development.

Head of Programmes and Advocacy of the Association, Charles Nyaaba, in a Citi Business News interview, asked the Agric Ministry to be proactive in its dealings to avoid the destruction of their produce.

“My concern is that the Minister for Food and Agriculture knows very well of the planting season. So if the Minister could put further pressure on the Ministry of Finance to release money, why was he waiting all this while and then allowing crops to get destroyed before bringing this because this might not actually address the problem.”

“So we still think that the urgency at which we expect the Ministry of Finance to act in terms of releasing money to fertilizer companies and adjusting prices and increasing subsidy components for farmers to be able to access fertilizer is not there.”

Charles Nyaaba further asserted that fertilizer suppliers are yet to receive the said money.

“The government comes to make statements in public but has not communicated anything to them. And if it is an intention that government wants to do so, how soon will this intention become a reality? Because in the next two weeks, most farmers who have already planted might not need fertilizer again. So if government is now waiting to start processing which will take a week or two to clear, it means that the essence for that money will not actually materialize,” he lamented.