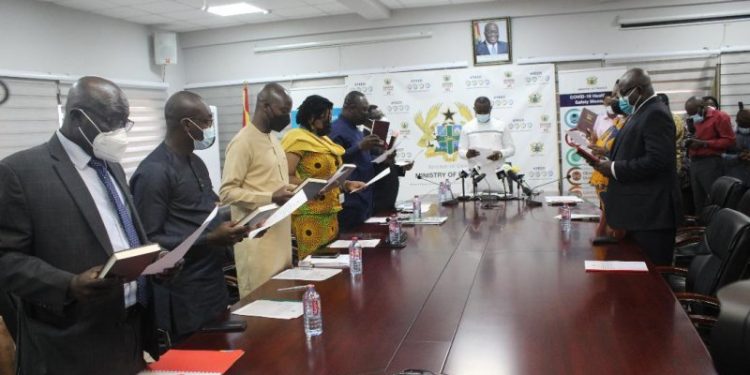 Mr John Kumah, the Deputy Minister of Finance, has urged the newly inaugurated board members of the Public Interest and Accountability Committee (PIAC) to execute their mandate to ensure that citizens benefit from the exploitation of petroleum resources.

Mr Kumah said, “your appointment is a call to public service, and I am confident that you will justify the trust that your nominating institutions, the government and people of Ghana have reposed in your diverse expertise and capacity”.

The Deputy Minister of Finance said this on Tuesday at the Inauguration of five new members of the 13-member PIAC board in Accra.

He said the Committee had applied hard work and determination to the execution of its mandate since its establishment, stressing that its work had impacted positively on the management and use of petroleum revenues in the country.

“Government’s recognition of this is demonstrated not only in ensuring stable financial support to its programmes and providing office accommodation for the Secretariat, but even to the extent that the President Nana Addo Dankwa Akufo-Addo was present himself to launch PIAC’s 10th-anniversary celebration on March 25, 2021, in Accra”, he said.

Mr Kumah said President Akufo-Addo had reiterated that government would continue to support PIAC in its work and stressed that the Ministry’s doors remained open to PIAC for engagement and collaboration while respecting PIAC’s independence as enshrined in the Act.

The PIAC was established by Section 51 of the Petroleum Revenue Management Act, 2011 (Act 815) as amended and inaugurated on September 15, 2011, with the mandate of ensuring transparency and accountability in the management and use of petroleum revenues in Ghana.

Professor Kwame Adom- Frimpong, the Chairperson of PIAC Board, thanked President Akufo-Addo for the confidence reposed in them and pledged to work according to the mandates of the Act.

The Act, he said, included making proposals for the formulation of policies on procurement and ensure policy implementation and human resource development for public procurement.

Mr Kumah urged the Board members to work assiduously to improve the image of the procurement profession in the country and also achieve the mandates of the Authority.

It is also to ensure that public procurement is carried out in a fair, transparent and non-discriminatory, environmentally and socially sustainable manner.

Prof Christopher Ameyaw- Akumfi, the Chairperson of the Board, assured government that the board would work with the law to prevent shortcuts of procurement and assist to ensure that the country’s purse was protected.