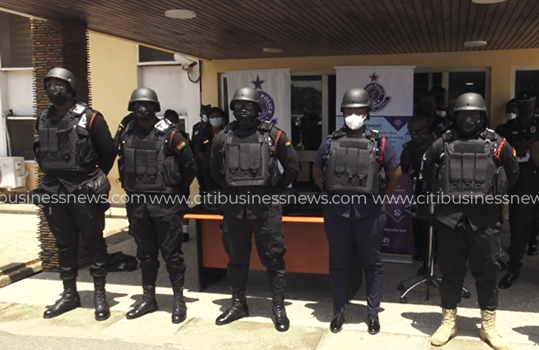 The Ghana Association of Bankers has handed 1,000 units of bulletproof vests and 1000 units of ballistic helmets to the Ghana Police Service as part of efforts to ensure the protection of police personnel in the country.

This move comes in the wake of several attacks on cash-in-transit operations and citizens within the country.

The Director General of the National Police Patrol Directorate, COP Patrick Akolgo, in receiving the items on behalf of the IGP at the Police Headquarters on Friday, reiterated his outfit’s role in ensuring safety in the banking sector.

“The IGP with the support of the Bank of Ghana has initiated plans to deepen our collaboration with the Ghana Association of Banks to manage the risk of robbery attacks on cash-in-transit vehicles and to also strengthen our personnel and security of all financial institutions in the country. That is where the emphasis is on,” he mentioned.

In the wake of incessant robbery attacks on bullion vans in the country which has so far left one police officer dead, the immediate past Inspector-General of Police, James Oppong-Boanuh, asked banks to provide fortified armoured vehicles for carting money.

The vehicles used by most banks operating in Ghana as bullion vans are not fit-for-purpose, putting both the personnel and the money being transported at risk.

Some police officers on these special duties have repeatedly complained about the unavailability of bulletproof vests and sophisticated weapons to protect them on these assignments, aside from the substandard bullion vans.

The Police Chief at the time said he will stop his officers from providing protection for these so-called bullion vans if the banks fail to adhere to the directive by the end of June this year.

Pertaining to the directive on procuring the required bullion vans for cash-in-transit operations, the CEO of the Ghana Bankers’ Association, John Awuah, disclosed that processes were underway to procure the right armoured vehicles for moving cash in the country.

“We have been detailed as in industry to ensure that as we go about our work, we are complying with the laws of the land. Part of it, which has come by way of the directive, is for us to ensure that we use the right armoured vehicles for cash evacuation, and we are working with the necessary stakeholders to ensure that we have the right and credible institutions to give those certificates to enable them procure the right armoured vehicles for our use. That work is ongoing, and we believe that you’ll hear very soon of the fleet that will replace the soft-skimmed bullion vans that we presently use.”