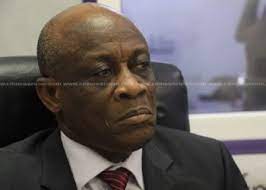 Former Finance Minister, Seth Terkper, is asking for in-depth details into how the government plans to achieve some of its targets in the 2022 budget.

One of such is the government’s revenue target which Mr. Terkper believes is over-ambitious.

The government of Ghana is aiming at increasing the tax to GDP ratio from 16% to 20% in 2022. This was revealed by the Minister for Finance, Ken Ofori-Atta while reading the 2022 Budget Statement in Parliament.

Although the government has missed its revenue targets over the years, it is still hopeful that it can generate GH¢100.5 billion in revenue next year up from a projected outturn of GH¢70.3 billion in 2021.

But former Finance Minister, Seth Terkper believes these targets are not feasible.

“I said it was over-ambitious because we did some numbers to show that for instance, the government is expecting 20% of revenue to GDP ratio and GRA for the first time will hit 17.5%. The last time we hit 17.5% was pre-rebasing (the first one not the second one) and the most optimistic we reach was 15% close to 16% in 2015.”

“So, we are not even talking about the tax to GDP ratio of 17% which is the Sub-Sahara African middle-income average which is where Ghana is. But we’re talking about shooting this thing (revenue to GDP) up from 13% that’s the average that we’re doing now. Not even by 5 percentage points to 18% and that’s still even ambitious,” he noted.

Speaking at a virtual 2022 Budget Review organized by PFM-Tax Africa Network, he demanded specific details as to how the government and the Ghana Revenue Authority plans to reach these targets.

He said, “We need a package. We have always said that and this budget convinces us. Because the revenue target is still ambitious. We need a program to tell us how GRA is going to achieve those targets. How the contraction with some of the numbers on the expenditure side are also going to be explained and how the items like SDR and others in financing will translate as revenue, how were they recorded, what portion goes to the Bank of Ghana, and what portion comes to the budget? We need all these details, and we hope that the Finance Committee will go into some of these issues.”