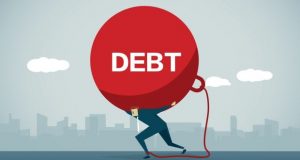 An additional GH¢1.5 billion has pushed Ghana’s public debt stock to GH¢341.8 billion as of September 2021.

Standing at GH¢340.3 billion in August this year, the new figure represents a marginal 0.44 percent increase in the country’s debt stock.

According to the latest Bank of Ghana’s Summary of Macroeconomic and Financial Data, the new debt figure brings Ghana’s debt to GDP ratio to 77.8% as of the end of September this year, just 0.2% percentage points shy of 78%.

This is the highest recorded so far this year, slightly higher than the debt-to GDP ratio of 76% recorded at the end of 2020.

The surge in the debt came largely from domestic debt and also as a result of the slight depreciation of the cedi to the dollar.

A breakdown of the debt numbers shows that the component of debt secured locally rose marginally by GH¢1.7 billion from GH¢176.4 billion in August to GH¢178.1 billion in the month under review.

The domestic component of the total public debt contains the financial sector resolution bond, which has for three consecutive months remained at GH¢14.9 billion, representing 3.4% of GDP.

However, the cedi component of the external debt shot up because of the decline in the value of the cedi to the dollar.

Despite the increase in the nation’s debt stock, the rate of increase has slowed down, when compared to the about GH¢30 billion added in April and May 2021.

However, it confirms concerns by analysts and economists that the country’s debt has reached alarming levels and urgently needs to be looked at.

According to the International Monetary Fund, the country remains at high risk of external and overall debt distress under the baseline, even though public debt is assessed as sustainable going forward.

The Bretton Woods institution further projects Ghana’s debt-to-GDP ratio to rise to 83.5% by the end of 2021.