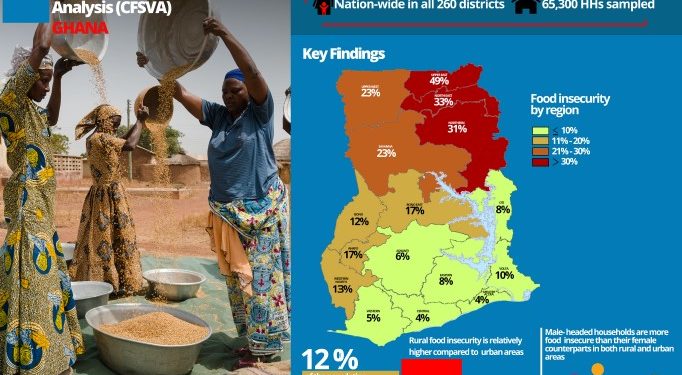 All the regions of the northern part of Ghana have ranked highest in food insecurity in the country.

This was revealed in the 2020 Comprehensive Food Security and Vulnerability Analysis report by the Ghana Statistical Service has revealed.

The upper east region led with 49% of food-insecure residents.

In contrast, the Greater Accra and Central regions were the lowest with 4 per cent each.

They are followed by western, Ashanti, Eastern and Oti regions with 5, 6, 8 and 8 per cent respectively.

The remaining regions were under 20% per the ranking of the report.

The research was conducted in 2020 from data gathered from over 65,000 households across all the 260 districts in Ghana.

Even though males are considered more financially empowered in the country, the data from the report also revealed that male-headed households were more food insecure than their female counterparts in both rural and urban areas.

Dr Peter Peprah is the  Project Coordinator for the Comprehensive Food Security and Vulnerability Analysis report and he added that, “

“Women I mentioned have got the opportunity or do get the opportunity to interact with nutritionists more, especially women who have made babies before and utilise the ANC services because this is the responsibility of the Ghana Health Service when the women are pregnant and attend antenatal care services.”

“So they are taught what needs to eaten and therefore it plays a role. Whereas we men may end up saying we have money so we can ensure that they prepare what we want to eat for us.”

He further shared some pointers on policy formulation and implementation to dress the challenges identified in the report.

“for targeting, I would advise that policymakers would rather look at the numbers and where these people are found because, as I said, we manage to get down into the district level so we can really get into the various the various districts and, putting the interventions or things we need to do to at least lift people up the bottom or the worst situation.”

below is an infographic on the findings of the report.