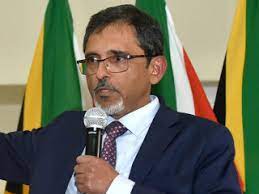 Member states of the African Continental Free Trade Area (AfCFTA) have concluded their negotiations on the rules of origin, a move expected to further reduce tariffs on original goods produced within the African continent.

This was disclosed by the Chairperson of the African Union Ministers of Trade, Ebrahim Patel.

Although trading under the African Continental Free Trade Area had officially begun on January 1, 2021, problems regarding rules of origin remained unresolved, making it difficult to identify products that could enjoy the preferential tariff regime under the agreement.

Speaking at a press briefing, Chairperson of the African Union Ministers of Trade, Ebrahim Patel noted that the adopted rules could cover 87.7 percent of goods on the tariff lines of the AfCFTA member states.

“The agreed rules of origin would become the basis for full-scale trade among the various member states under the free trade agreement to boost Africa’s economic growth. That is a big breakthrough. For ordinary citizens on our continent, this means more jobs, more economic opportunities, and Africa’s opportunity to say we want to industrialize. We cannot simply remain the generators of raw materials,” he said.

Secretary-General of African continental free trade area, Wamkele Mene, said the conclusion of negotiations on rules of origin was an important milestone towards a successful implementation of the free trade pact.

He noted that plans are far advanced to gazette the schedules of tariff concessions, in accordance with applicable national legislation.

On January 28th 2022, the Eighth (8th) Meeting of The African Continental Free Trade Area (AfCFTA) Council of Ministers Responsible for Trade was held in Accra, Ghana.

The overall objective of the meeting was to assess the status of negotiations on outstanding issues and agree on the steps towards the start of commercially meaningful trading under the AfCFTA.

In addition to the progress report from the Secretary-General of AfCFTA, His Excellency Wamkele Mene, the Ministers considered a report of Senior Trade Officials who met in Accra, Ghana, from 24 to 27 January 2022.