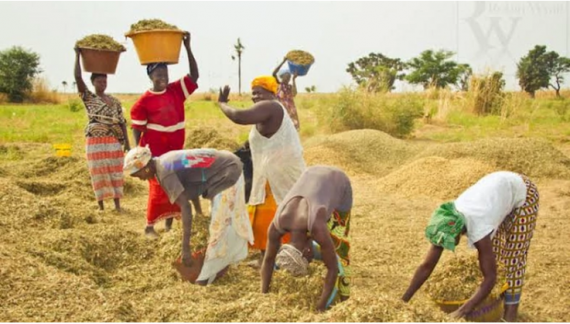 Research has shown that although rice is the second most important staple food after maize in Ghana, only one-third of rice consumed here is produced locally.

In the recent past, rice farmers with some government support and initiatives like the made in Ghana Rice Campaign spearheaded by the CEO of Citi Fm and Citi TV, Samuel Attah Mensah saw an increase in the demand for the produce.

At the moment, however, rice producers have to cope with what they describe as unfair competition from imported rice due to the benchmark value discount policy which makes imported rice cheaper by 25% when compared to local rice.

Rice farmers have also complained of inefficient seed systems, inappropriate harvesting equipment, costly transport and logistics, insufficient milling capacities and inadequate storage facilities, resulting in volume and quality post-harvest losses. Meanwhile, they still have to deal with the perception from some consumers that local rice is inferior to those imported.

In an interview with Citi Business News, Convener of the Rice Millers Association of Ghana, Yaw Adu Twum explained that given the current weather conditions, rice farmers are in dire need of silos and asked the government to step up its efforts in protecting the local rice industry

“At this point that the harmattan has set in the rice is totally dried up so when I mill, it comes out a hundred percent broken and that means that the value that I put on the rice will be reduced by fifty percent, and so I run at a loss.  This can be mitigated by simply putting in structures that will store the rice during harvest so that we don’t talk about glut”.

“We have been talking and talking but nobody is listening. I’ve gone all the way from the Ministry of Agriculture to the Ministry of Finance with a proposal to bring in US Exim Bank which was ready to give us a facility so that we install silo facilities that can take about a hundred thousand metric tons across the country so that we can put in the surplus but it came to nought, nobody took me seriously. So that proposal is dead at the  Ministry of Finance as I talk to you”.