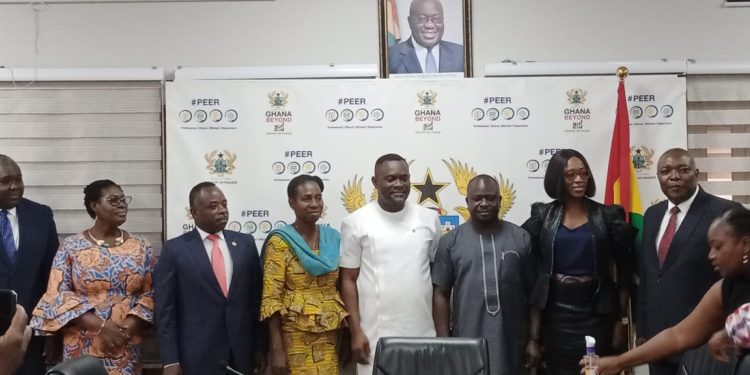 The Honourable Deputy Minister of Finance, Dr John Kumah, today inaugurated the Governing Board of the Ghana Statistical Service and charged the members to provide the needed guidance and assistance to the Management of Service. He further asked the Board to among others:

(i)         Work towards expanding the Establishment Post of the Service by ensuring experienced senior officers lead the production of statistics;

(iv)  Facilitate work within the National Statistical System and,

(v)        Initiate the process for the drafting of the Legislative Instrument for the Statistical Service Act, 2019: Act 1003

In a short ceremony, the Deputy Finance Minister, on behalf of the President and the Minister, expressed the appreciation of the Ministry to the immediate past Board for their wonderful guidance that culminated in the conduct of the first digital census in Ghana. He remarked, “‘We were impressed with the release of the Provisional Results within 44 days of completing field data collection. Now we are guided by the most current data in analyzing the Ministry”.

He also thanked the Government Statistician and his team for working tirelessly and smoothly without a governing Board for the past five months, noting that, “today’s inauguration of the Board would quicken the pace of growth and development, and the industrial harmony in the Service’’

The inaugural ceremony was conducted in accordance with Section 5 (2) of the Statistical Service Act, 2019: Act 1003 which mandates the President of the Republic, in consultation with the Council of State to appoint members to serve on the governing board of GSS. The Board, he stated, was relatively small though made up of persons with expert and diverse knowledge in statistical production and the management of human resources. These two key skills, he remarked, are needed in the transformational agenda embarked upon by the immediate past Board, which would enhance the status of GSS in the international statistical eco-system.

The Minister was of the view that Ghana is fast recovering from the impact of COVID-19 per quarterly and annual GDP growth rates released by the Statistical Service, and stated that as a country, ‘’we would strongly encourage you to continue to lead the staff to provide high-quality statistics to guide the country’s growth and development as outlined in the Coordinated Programme for Economic and Social Development Policies’’.

The Statistical Service has embarked upon the Annual Household Income and Expenditure Survey (AHIES) that would soon provide the country with data on quarterly Labour Force, Quarterly Multidimensional Poverty and Vulnerability Status. Data that would inform those in policy-making, academia and research as to whether the country’s programmes and policies are impacting positively on the populace. Since the government needs to know the outcome of the various government policies, he pledged the government’s support to the Service in all ways possible to re-tool it to achieve its core mandate of providing quality, relevant, accurate and timely statistics for National Development.

The Deputy Minister reminded the Board that the country depends strongly on Statistical Service to generate accurate and timely data to report on the Sustainable Development Goals and the African Union Agenda 2063 and tasked the Board to lead the country in this direction to promote the effective use of statistics and stimulate research activities.

He promised the Board that the government will find needed resources to facilitate their work since there is increasing demand for credible data for evidence-based decision making. He further added that the Government through the World Bank, provided the Service with an amount of $150 million for the conduct of the census and to harmonize and strengthen data collection systems in Ghana and seven West African Countries. Though, the Deputy Minister acknowledged that a considerable amount of that money was spent on the 2021 Population and Housing Census; the Board should ensure the efficient use of the remaining resources as other initiatives are explored to financially strengthen the Service.

The Deputy Minister concluded his remarks by assuring the Board of Government’s support and preparedness to provide the requisite resources, both human and financial, to enable them to succeed in their national assignment.

Responding on behalf of the Board, Dr Grace Bediako remarked that they deemed it an honour to be called upon to serve the country as Board members and indicated their readiness to deliver as expected of them. She, therefore, called on all the MDAs within the National Statistical System to cooperate with them to achieve their targets. 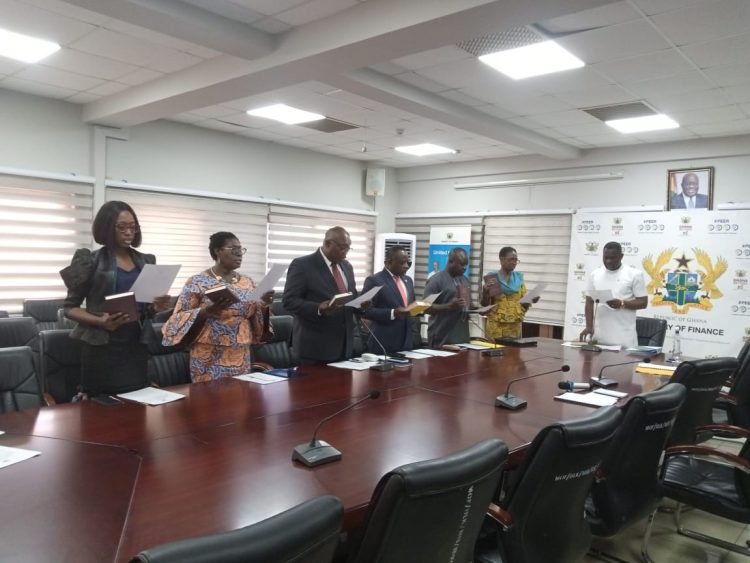 Dr. Bediako holds a PhD in Demography from Philadelphia University. She has had working relationships with the UN Statistics Commission in various capacities until she joined Statistical Service in 2004 as the Government Statistician. She was in GSS for eight years before joining NDPC as an Advisor and ended her tenure as the Ag. Commissioner General of NDPC. In 2017, she was appointed the Board Chair of GSS and has retained the same position to ensure continuity of Service. Dr. Bediako is an alumna of the University of Ghana.

Prof Annim has been the Government Statistician since March 2019 and he has distinguished himself since then. He joined the Service at a time that the heat was on in finalizing the Census processes. He holds a PhD in Economics from Manchester University and he spent his working life teaching Economics at the University of Cape Coast and other tertiary institutions. In Cape Coast, he worked in various capacities ending his engagement as the Director of Research, Innovation and Consultancy. He is an alumnus of the University of Cape Coast.

Ms. Akrong is an Award-Winning HR Practitioner who had worked in various Fortune 500 Companies in the United States, United Kingdom and Africa. She is currently the HR Director for Vodafone Ghana. She holds an MA in Human Resources and Industrial Relations from the University of Minnesota. She is also an alumna of the University of Ghana

Dr. Dzahene-Quarshie is a Professor of Modern Languages with a specialization in Swahili from the University of London and has been working with the University of Ghana since 1991. She holds a PhD in African Studies and is currently the Director of the Confucius Institute at Legon. She has over 24 research publications to her credit.

Prof Osei is an Associate Professor at the Institute of Statistical and Social and Economics Research and also serves as the Dean of Graduate Studies at the University of Ghana. He holds a PhD in Economics from the University of Nottingham and an MSc in Quantitative Development Economics from the University of Warwick. Robert is currently a Board Member of Stanbic Bank Ghana Limited and a co-chair of a new initiative known as the Digital Agricultural Innovations and Services Initiative which is being jointly managed by J-PAL (Based in MIT, USA) and the Center for Effective Global Action (based in UC Berkeley, USA).