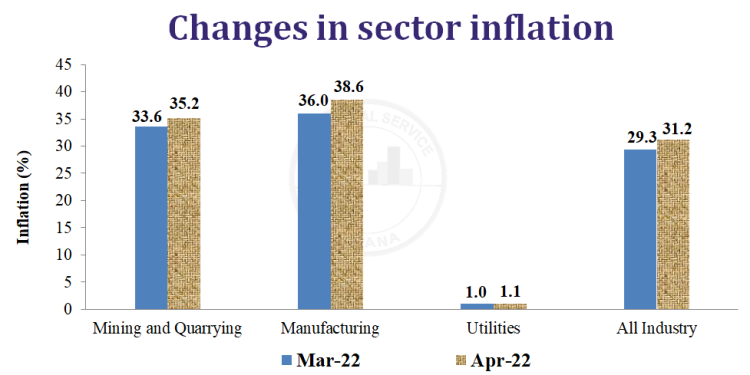 Recent data from the Ghana Statistical Service show that producer price inflation, the average price of goods and services received by domestic producers for their production activities, for the month of April has risen by 1.1% to a record 31.2%.

This increment was mainly influenced by the manufacturing sub-sector, which constitutes more than two-thirds of the total industry.

In April 2021, the producer price inflation rate for all industry was 10.9 percent. The rate increased to a record 11.8 percent, but decreased continuously to a record 8.1 percent in August 2021.

Subsequently, it resumed an upward trend to a record 31.2 percent in April 2022, up from the 29.3 percent recorded in the previous month.

According to the Ghana Statistical Service, the month-on-month change in the producer price index between March 2022 and April 2022 was 1.1 percent.

In April 2022, two out of the sixteen major groups in the manufacturing sub-sector, which constitutes more than two-thirds of the total industry, recorded inflation rates higher than the sector average of 38.6 percent and the total PPI for the month of April.

The Mining and Quarrying sub-sector followed suit to record a rate of 35.2 percent up from the 33.6 percent recorded in March while the utility sub-sector recorded the lowest rate of 1.1 percent in the month under review.

On a month-on-month basis, the manufacturing sub-sector recorded the highest rate of 1.6 percent, followed by the mining and quarrying sub-sector with a rate of 0.4 percent.

The utility sub-sector recorded no inflation in the month of April 2022.

What does the increase in prices incurred by producers of goods and services in the country mean to the final consumer?

President of the Association of Ghana Industries, Dr. Humphrey Ayim-Darke explained, “Once the Producer Price Index is computed from the angle of production, it is infused into the Consumer Price Index through which it informs the inflationary figures that come out.”

“What it indicates is that cost of production has gone up and the impact will be on the final product that is churned out of our factories and various entities. So it doesn’t surprise anybody to see on the markets that a number of final products have gone up in prices. The impact on the consumer is that it affects their purchasing power if their various income statuses haven’t changed. So final products that are passed on to the consumer increases.”