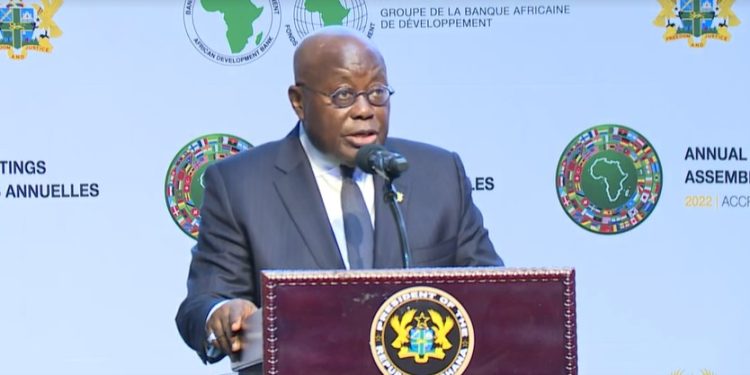 This is according to President Nana Addo Dankwa Akufo-Addo.

According to him, the phenomenon is denying the continent the needed tax revenue to finance important development programmes for the country.

Speaking during the opening ceremony of the 57th Annual Meetings of the African Development Bank in Accra, President Akufo-Addo charged African governments to put in place stringent measures to end the menace.

“The time has come to move towards an economic model which serves our interests, not others. Profits from our resources have benefitted foreign creditors for too long, while we suffer abusive borrowing costs on the international capital markets. There is no basis for our economies being saddled with a so-called “African Risk Premium”, which translates into higher spreads than for our European and American counterparts, particularly when our resources were the catalysts for the economic advancement of Western nations. It is time we worked to address the structural barriers to our development.”

“We must also deal with tax-dodging and illegitimate commercial transactions by multinationals, which account for sixty percent (60%) of the eighty-eight billion dollars (US$88 billion) of illicit financial flows from the continent annually, and other relationships which inhibit our development,” he said.

President Akufo-Addo stressed the need for African governments to also grow their domestic economies without interference from external controls.

According to the Economic Development in Africa Report 2020 by the UN Conference on Trade and Development (UNCTAD), Africa loses about US$88.6 billion, 3.7 percent of its gross domestic product (GDP), annually in illicit financial flows.

The 57th Annual Meeting of the African Development Bank Group seeks to look at the resilience of African economies and the growth of its people post COVID-19.

The Annual Meetings are the most important events on the governance calendar of the bank group, attracting around 3,000 delegates, which includes representatives of governments, business, civil society, think tanks, academia, media and other attendees annually.

The 2022 annual general meeting is under the theme “Achieving Climate Resilience and a Just Energy Transition for Africa”.