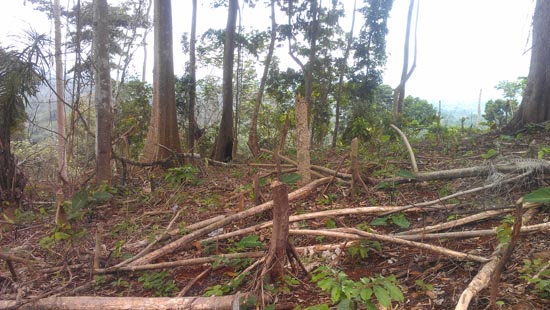 Deforestation is a major issue in Côte d’Ivoire and Ghana, which together produce nearly two-thirds of the world’s supply of cocoa.

Côte d’Ivoire and Ghana respectively lost 25% and 8% of their primary forest between 2002 and 2019, with a significant portion of deforestation due to cocoa farming.

The Ghana Cocoa Board has described this situation as disheartening and believes this issue must be tackled with all urgency.

The CEO of the Board, Joseph Boahen Aidoo, was speaking during a high-level meeting with Senior Representatives of the Cocoa Value Chain from Côte D’Ivoire and Ghana which sought to discuss challenges both countries are facing in the sector.

“When you talk about climate change, it’s not just restricted to foreign countries. We’re all feeling it and it’s a concern to all of us. Critically, we are encouraging our farmers not to cut any forests anymore just to ensure that we have enough forests to protect this climate. But whiles we forge some kind of alignment with the EU to get a solution, some industry actors are now moving into large-scale cocoa plantations outside, cutting forests. That is unfair.”

Data analysis by a global advocacy organization, Mighty Earth earlier this year revealed that overall levels of deforestation remain near record highs four and half years after chocolate companies and governments committed in the Cocoa and Forests Initiative (CFI) to a ban on establishing any new cocoa farms.

The report disclosed that even after the cocoa industry published action plans in the CFI in 2017, Côte d’Ivoire and Ghana have lost 19,421 hectares and 39,497 hectares of forest respectively within cocoa growing regions with a high rate of deforestation of 3.9 percent.