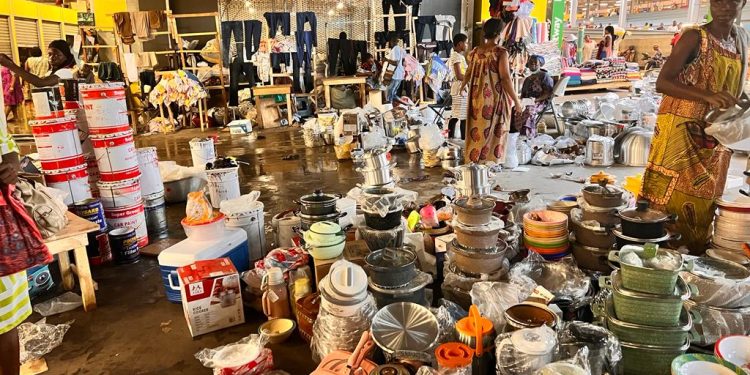 Scores of traders at the New Kejetia Market in Kumasi are once again counting their losses after some pipes in the facility burst and led to flooding, which has caused destruction to their goods.

During Citi News’ visit to the market on Wednesday morning, the affected persons were seen scooping water out of their shops.

The latest incident brings to seven, the number of times the burst pipes have caused flooding and destroyed the wares of the traders.

After the previous incident on Monday, the leaders of the traders at the market in an interview with Citi News said they were convinced that based on assurances from the management, such an incident will not recur.

However, after today’s incident, two trader groups; eleven member steering committee and concerned central market traders association have decided to proceed to court to demand for compensation for all affected persons.

The General Secretary for the concerned central market traders association, Reuben Amey said their decision to go to court is the only option available to them.

“Unfortunately for those that had their goods destroyed, no compensation was paid to them, so market leaders have asked traders to separate the destroyed wares from those that can be sold. We need to sit with management to immediately find compensation for them. If we do not find a solution to this, it will keep happening.”

This is the umpteenth time the market is recording such a flooding incident.

Recently, parts of the New Kejetia Market in Kumasi flooded after a similar incident led to the destruction of the goods of some traders.