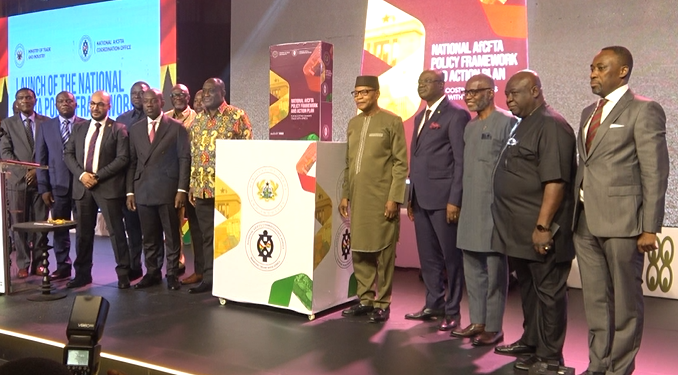 President Akufo-Addo has urged the Ministry for Trade and Industry to ensure the hastened implementation of programs under the African Continental Free Trade Area (AfCFTA) agreement to allow for businesses to export significantly across the continent.

This follows the launch of the National AfCFTA Policy Framework and Action Plan for boosting Ghana’s trade with Africa in Accra on Tuesday.

The framework, which is geared toward the harmonisation of relevant policies, programmes, laws and regulations to boost the productive capacities of the private sector in Ghana, particularly the MSMEs, is to harness the full benefits of the continental trade area agreement.

“The Ministry of Trade and Industry and the Ghana Coordinating office of the AfCFTA, this framework, as brilliantly as it is structured will not mean much if you do not implement the programs under it with speed, effectiveness and commitment, said the Minister for Information, Kojo Oppong Nkrumah presenting a speech on behalf of the President.

“It is your successful implementation of the programs under this framework that matters and which will ensure that thousands of Ghanaian businesses can ride on its back and export significantly into the African continent. Thereby boosting local economic activity, our growth, jobs and earnings. So go at it and don’t be held back by the hurdles that will come your way.”

He further also tasked the private sector to continue collaborating with the government to ensure the success of the continent-wide pack.

“To the Ghanaian private sector, your Government is working through this and other initiatives to make it relatively easier for you to get access to this large market of over a billion people to enable you to trade more goods and services out. Yours is to take advantage of it and collaborate with us to resolve any teething challenges that may come up. But no matter the nature of the challenges, be resolved to work with us, hand in hand, to make this work.”

Why the need for a National AfCFTA Policy Framework and Action Plan?

The AfCFTA is a Single Market (Duty-free Quota-free) trading bloc covering the entire African Continent, with a total population of 1.3 billion and a combined Gross Domestic Product (GDP) of almost USD 3.4 trillion. It is the largest trading bloc in the world outside the World Trade Organization (WTO) with a current membership of 54 countries.

The objective of the AfCFTA is to create a continental market for goods and services, with free movement of persons and investments.

Ghana as the host country for the Secretariat of the AfCFTA has a critical role to play in its implementation. Hosting the AfCFTA will enhance Ghana’s visibility as an investment destination in Africa and impact positively on the economic development agenda of the country.

This requires sustained political commitment and leadership to encourage the rest of Africa to take the bold, critical but difficult steps needed to bring prosperity to the continent.

It is against this background that the Ministry of Trade and Industry has led the development of the National AfCFTA Policy Framework and Action Plan for Boosting Ghana’s Trade with Africa.

The Plan outlines the short to medium-term implementation priorities and strategies for the Ghanaian private sector to harness the full benefits of the AfCFTA.

The document was put together by the AfCFTA Inter-Ministerial Committee, National AfCFTA Steering Committee and seven Technical Working Groups that comprised representatives from the private sector, Senior Government Officials, and other technical experts.

Minister for Trade and Industry, Alan Kyerematen, on the back of this tasked “Ministries, Departments and Agencies (MDAs) as well as Metropolitan, Municipal and District Assemblies (MMDAs), together with institutions such as Banks, Insurance companies, Transport and Logistics companies” to all work together to empower the private sector in Ghana to harness the full benefit of the agreement.

Progress made under the AfCFTA

He said, “the Secretariat reported significant progress in the state of readiness of State Parties for the start of commercially meaningful trade under the AfCFTA, in line with the recent Decisions of the 35th Ordinary Session of the Assembly of Heads of State and Government of the African Union in February 2022”.

Key instruments for trading under the AfCFTA, including the Schedules of Tariff Concessions and Schedules of Specific Commitment on Trade in Services as well as Trading Documents and tools for operationalising the AfCFTA preferences that will facilitate cross-border transactions (such as the Rules of Origin Manual, E-Tariff Book and the Pan-African Payments and Settlement System) have all been finalised.

The Council of Ministers has also approved a Secretariat-led initiative for guided trade under the AfCFTA. This initiative seeks to facilitate commercially meaningful trading, among interested State Parties that have met the minimum requirements for trade, under the Agreement.

Mr. Ali was delighted to note that in all of this, “Ghana is one of the State Parties that have expressed interest in being part of the initiative and plays a pivotal and focal role in facilitating trades with the other African regions”.