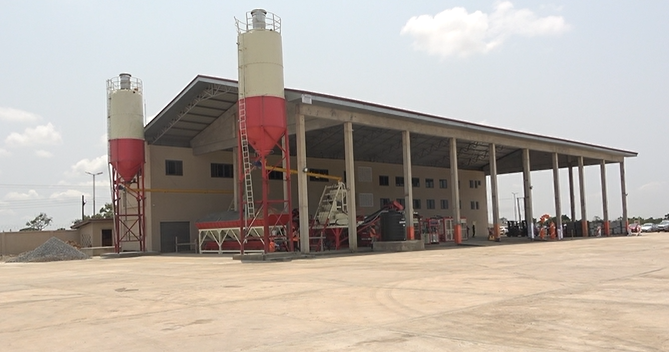 As part of efforts to expand its operations across the various regions in Ghana, Kumasi-based leading construction firm, Nickseth Construction Limited has launched an operational yard and concrete production facility at Appolonia Industrial Park.

The three-acre, state-of-the-art production complex is the company’s operational yard for the southern sector of Ghana.

Nickseth Construction’s new factory has two production lines; each of which can produce 16,800 six-inch concrete blocks every eight hours, or more than 33,000 per shift.

The facility has three warehouses, a service room, common rooms, offices, multi-purpose rooms, an administration block, a canteen and a kitchen yard.

But why Appolonia City? The Kumasi-based construction company located its facility in Appolonia City’s light industrial park for control over materials used for construction works and expansion of its furniture and steel fabrication business.

The Technical Director of Nickseth Construction Limited, Charles Essel explained further, “As a developer, you want to look for land availability. In the Southern sector, litigation issues are also a major issue. Industrial activities also have some environmental control conditions. So when we heard of an industrial park, we felt that it fit into the whole idea of moving to the southern sector. Also, we thought that geographically, it was a good choice.”

Charles Essel further stressed his outfit’s commitment to maintaining quality in its production in order to stay relevant in the space.

Board Chairman of Nickseth Construction Limited, Dr. Godfred Owusu-Boateng, called for prudent measures and collaborative efforts among stakeholders to allow the company to flourish in Accra just as it has done in Kumasi over the years.

“The Kumasi Operational Yard has set the pace. However, our products may be relatively new in the southern sector, where the river of business is turbulent and companies are striving to stay afloat. Also, there may be many unknown happenings, such as the Russia-Ukraine war and the COVID-19 pandemic.”

“We need prudent measures such as predictive and proactive disposition to mitigate such shocks, position the company on a solid footing and deliver and win the loyalty of clients,” he said.

On his part, Chief Executive Officer of Appolonia City, Bright Owusu-Amofah, explained to Citi Business News how Nickseth’s partnership with his outfit will help better construction in the city.

“We are developing a new satellite community for 100,000 people, and this community will need the likes of Nickseth to provide such services. We will be developing 30,000 homes here so certainly, we will need blocks to do that. We’ll also need concrete products for the several roads we’ll be constructing here. The launch of this modern facility is a great step towards realizing the vision of a world-class light industrial park within a planned mixed-use city.”