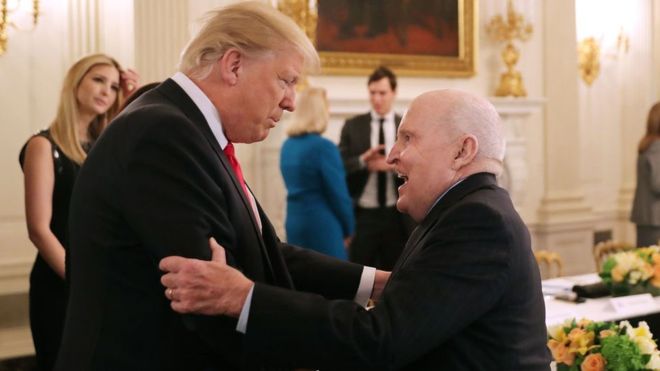 Jack Welch, a titan of American business who transformed General Electric (GE) into America’s most valuable company, has died aged 84.

He ran the US conglomerate from 1981 until 2001 and was once named “manager of the century” for his achievements.

Nicknamed “Neutron Jack” for his cost-cutting, he became a best selling author and confidante of US presidents.

President Donald Trump Tweeted that Mr Welch was a business legend and friend.

Mr Welch joined GE as a chemical engineer in its plastics division at Pittsfield, Massachusetts, before being elected the company’s youngest vice-president in 1972.

In 1979 he became vice-chairman and by the end of 1980, it was announced that he was to become chairman and CEO of the firm, a position he held for 20 years before retiring in 2001.

While at the helm in the 1980s and 1990s, he bought and sold scores of businesses, expanding GE into financial services and consulting. He was also known for his focus on efficiency and streamlining management. He would regularly cull the lowest-performing 10% of staff each year. “The underperformers generally had to go,” he wrote in one of his books.

A guru to thousands of management hopefuls, his books “Winning” and “Jack: Straight from the Gut” were bestsellers during his retirement.

More recently, a turn for the worse in GE’s fortunes has prompted a second look at Mr Welch’s accomplishments.

During the 2008 global financial crisis, losses at the firm’s financial services arm delivered a body blow to the firm, which subsequently scaled back its operations, selling off many of its less profitable or ancillary businesses.

Mr. Welch’s generous retirement package also drew controversy as an example of excessive executive compensation after details of it aired during his divorce settlement.