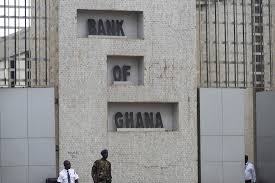 The first quarter banking sector report published by the Bank of Ghana has shown that the private sector accounted for 96.9% of the total Non-Performing Loans (NPLs) within the industry.

By this, the share of loans gone bad within the banking sector not attributable to the private sector represented 3.1%.

According to the banking sector report, the total non-performing loans reached 6.63 billion cedis as at February 2019.

The figure represents a drop of 14.4 percent from the 7.74 billion cedis recorded in the same period in 2018.

The banking sector report further indicated that the stock of credit to the private sector (comprising private enterprises and households) grew moderately 33.23 billion cedis in February 2019 from 33.15 billion cedis in the preceding year.

It was followed by the services and manufacturing sectors with 22.3 and 11.9 percent respectively.

For the period that the Bank of Ghana’s report covers, the banking sector recorded a more robust growth in deposits.

The figure increased from 59.9 to 71.86 billion cedis within the one year period.

This translates into a growth of 20 percent as at February 2019.