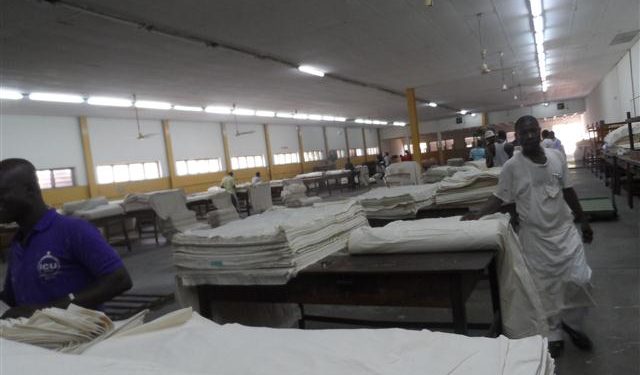 Juapong Textiles Limited wants government to as a matter of urgency intervene and inject fresh capital to save the company from collapsing.

According to management of the textile manufacturer the new capital will be used to replace outmoded equipment, purchase raw materials and spare parts among others in order to get the factory to optimize its full capacity to also become competitive.

Technical Director of the company, Evans Agyagbo says for the company to survive and function fully, it needs capital injection to enable it purchase raw materials for its operations, cater for maintenance of its mostly obsolete machines, buy chemicals and pay workers.

“As at now, we need at least GHC15 million from government or any other source to support  us, so we can  be able to run the factory on commercial basis because lack of funds renders us ineffective and inefficient this leads to losses,”

He further appealed to government through the Ministry of Trade and Industry and the MP for the area to as a matter of national interest inject fresh capital to save the company from collapsing.

“I have been able to increase the staff strength. When this company was fully operational, the youth here and from other parts of the region were employed, and I strongly believe that this is a national asset and we should  not allow it to collapse”.

The Juapong Textiles Factory was established in the 1960s to supply plain cloth (gray baft) to other textile companies in the country as part of an integrated textiles industry.

Meanwhile Citi Business News has learnt that workers of Juapong Textiles Limited have resumed work after embarking on an indefinite strike last week.

The workers had vowed not to return to work till issues regarding unpaid salaries are resolved accusing the technical Director of the company Evans Agyagboe of mismanaging the company.

But Citi Business News checks showed that the workers have returned to work after they had been paid the outstanding September salaries.