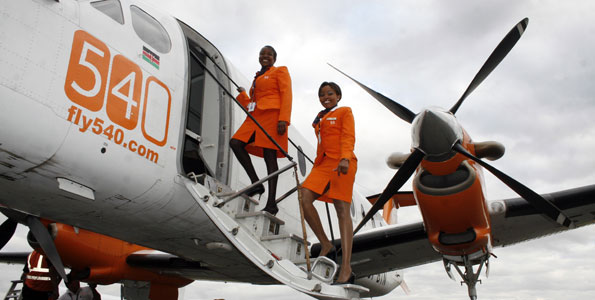 Workers of domestic airline operator Fly 540 have threatened to hit the courts this week over unpaid severance package owned them.

[contextly_sidebar id=”87uxoMNWzOeo6r00Alb1xk1t50gHAUkB”]Citi Business News has gathered the workers have already hurled the airline to the National Labor Commission over the matter.

Fly 540 laid off dozens of workers from the airline including flight attendants, engineers and pilots after it temporally suspended operations in Ghana last year.

Citi Business News has learnt the airline will need to cough up about 250,000 dollars to settle the workers.

One of the workers who spoke to Citi Business News on condition of anonymity said all efforts to get the airline to pay the workers have proved futile.

Citi Business News checks reveled that former offices of the airline have been shut down while its only visible asset which was its airline has since the suspension been moved out of the country.

Fly 540 suspended operations in Ghana in May last year over financial and operational challenges.

Despite laying off a majority of its staff following the suspension of its operations in Ghana, about 10 percent of its staff was maintained, however sources familiar with the matter tell Citi Business News those workers have also not been paid since last year.

President Nana Addo Dankwa Akufo-Addo has appointed the Member of Parliament for Ngleshi Amanfro, Sylvester Tetteh as the new Board...

Stateholders must create accessible, affordable insurance for all – UNDP