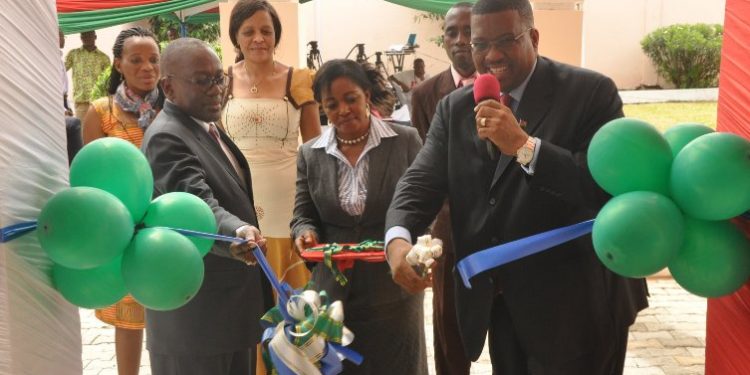 From Right His Excellency Charles Josob cutting ribbon to officially launch the High Commission of Namibia in Ghana. (FILEminimizer)

The Deputy High Commissioner of the Republic of Namibia to Ghana, Mr. Gabriel Shaanika has stressed on the country’s objective and strong will to build on relations with Ghana as a member of the Commonwealth of Nations and the African Union.

He made the statement at the press launch of the High Commission of the Republic of Namibia in Accra.

Speaking at the event, Mr. Shaanika noted that “Namibia and Ghana have a long standing excellent political relationship. Now much more is needed to strengthen the relationship in terms of trade and investment. Over the years, both countries have contributed to the economic wellbeing of each other. It is very important to strengthen the relationship between our two countries and to initiate more trade and investment projects to boost our economies. With Agriculture in common, Namibia will seek to explore local partnerships with Government and local organizations.”

He further added that permanent representation in Ghana will ensure continuity of the existing cooperation between Ghana and Namibia.

The Namibian High Commission will serve as the one and only representation of Namibia in Ghana.

The office will offer visa and consular services, travel and tourism advice and also serve as a council for trade and investment.

Namibia attained independence in March 1990 after a protracted struggle.

Mr. Sam Nujoma was elected the first president and is referred to as the Founding President and Father of the Namibian nation.

The country has subsequently developed into a haven of peace and stability, in its practice of multi-party democracy.

It shares borders with Angola, Zimbabwe, Zambia, Botswana, South Africa, and on the west by the Atlantic Ocean.

It is rich in diamonds, beef products and fish from its expansive territorial waters.