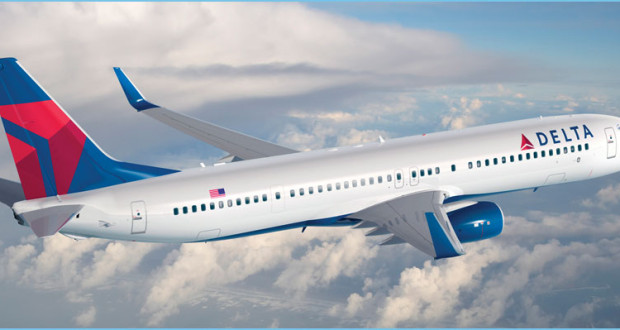 Delta’s adjusted pre-tax income for the March 2015 quarter was $594 million, an increase of $150 million over the March 2014 quarter on a similar basis.

Delta’s adjusted net income for the March 2015 quarter was $372 million, or $0.45 per diluted share, and its adjusted operating margin was 8.8 percent.

The company used its strong cash generation in the quarter to return $500 million to shareholders through dividends and share repurchases and to make $904 million in pension contributions.

“While the strong dollar is creating headwinds with international revenues, it also contributes to the lower fuel prices which will offset those headwinds with over $2 billion in fuel savings this year.  We are looking at June quarter operating margins of 16-18 percent with over $1.5 billion of free cash flow—these record results and cash flows show that the strong dollar is a net positive for Delta.”

To address currency headwinds, Delta plans to reduce its international capacity by 3 percent year over year for the winter schedule.

These international reductions, combined with 2 percent domestic growth, will result in flat system capacity for the December quarter.

Capacity adjustments will be focused on markets that have been most affected by the strong dollar and markets where demand has been negatively impacted by the decline in oil prices.

Delta’s operating revenue improved 5 percent, or $472 million, in the March 2015 quarter compared to the March 2014 quarter.

Traffic increased 3.6 percent on a 5.0 percent increase in capacity, which includes 2 points due to capacity removed in the first quarter of 2014 as a result of winter storms.

Foreign exchange pressured revenue by $105 million for the quarter.

Cargo revenue was unchanged from the prior year period as higher volumes offset lower yields.

Comparisons of revenue-related statistics are as follows:

“The substantial benefit from lower fuel prices will again more than offset the unit revenue decline of 2 to 4 percent for the June quarter to produce operating margins north of 20 percent at market fuel prices.”

Adjusted fuel expense2 increased $23 million as lower market fuel prices were offset by $1.1 billion of settled hedge losses, including $300 million of early settlements of contracts originally settling in the second half of 2015 as the company restructured its hedge book.

Consolidated unit cost adjusted for fuel expense, profit sharing and special items (CASM-Ex3), was down 1.4 percent in the March 2015 quarter on a year-over-year basis, with higher capacity, foreign exchange and the benefits of Delta’s domestic refleeting and other cost initiatives offsetting the company’s investments in its employees, products and operations.

“With nearly 10 percent of our expenses non-dollar denominated, we are seeing cost tailwinds from the strong dollar which should benefit our non-fuel unit costs by 1 point in the June quarter,” said Paul Jacobson, Delta’s chief financial officer.

“With this currency benefit and the strong cost control that is a hallmark of the Delta culture, we are on track to deliver our eighth consecutive quarter of non-fuel unit cost growth below 2 percent in the June quarter.”

These cost increases were partially offset by foreign exchange and savings from Delta’s cost initiatives.

Non-operating expense, adjusted for special items, declined by $34 million as a result of $55 million in lower interest expense, partially offset by an $11 million higher foreign exchange loss on foreign-denominated assets and liabilities compared to the first quarter of 2014.