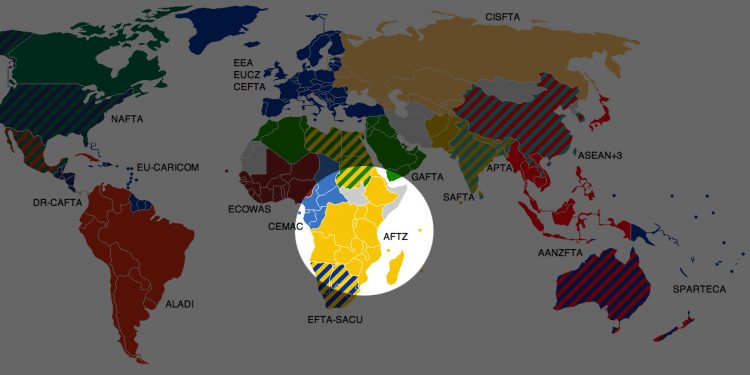 Twenty six African states including Ghana are working towards the removal of trade barriers for a single trade zone for the continent by 2016.

[contextly_sidebar id=”o1OotqHPmDVOMJ9EvWfGywQcf9BNrqTu”]A final meeting to approve the Africa Free Trade Zone (AFTZ) treaty is scheduled for June, after which citizens of member states would travel and trade without visa.

The training course is under the auspices of the Union of African Journalists (UAJ) aimed at offering opportunity to young journalists to share ideas and help find solutions to challenges facing Africa.

Mr Haggag said the treaty will also allow citizens of the 26 African states to work freely in any of the member states.

He noted that the physical borders erected by colonial masters were major causes of the continent’s dwindling economic fortunes and was happy Africa’s dream of a single free trade zone would materialize next year “hopefully.”

“If we consider ourselves as Africans, we should be able to trade among ourselves irrespective of the physical borders and I’m happy next year, Ghanaians can bring their cocoa and other local products to Egypt without any restrictions,” Mr Haggag stated.

He expressed optimism that free trade among African states could address high unemployment rate on the continent and reposition Africa as an economic Mr Haggag also believed the treaty would bring to end, issues of ill-treatment meted out to Africans working in member states.

According to him, the future looked bright for the continent and urged the “AU Border Committee” to work towards the removal of artificial borders to further facilitate trade and social cohesion en route for Africa Unity.

Mr Haggag expressed concern about the mad-rush for agricultural lands on the continent by Europeans and called on Africa heads of states to address the “abnormality”.

A single free trade zone spanning the length of the continent had been a long time dream with some African heads of states unsure its benefits.

The recent signing of the Economic Partnership Agreement (EPA) with the European Union also threatened Africa’s economic integration but trading blocks on the continent are optimistic AFTZ, consisting of 26 countries with a GDP of an estimated $ 624bn (£382.9bn) would ease access to markets.

Bank of Ghana to investigate ADB