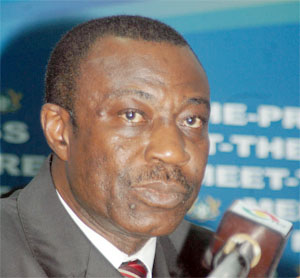 Ranking Member of Parliament’s committee on finance, Anthony Akoto Osei has hinted of plans by the legislature to take on the Bank of Ghana (BoG) for what it describes as mismanagement of Ghana’s sinking fund.

Dr. Akoto Osei blamed the development on the IMF’s influence which he said compelled the government to meet its net borrowing requirement.

[contextly_sidebar id=”PW12pjIhV8iT2vWJaGV3rc9twycQm0np”]Funded by the excess money after the cap on the stabilization fund is reached, the sinking fund is to help the country defray its accumulated debts.

The finance ministry in March this year also indicated that the central bank swept 100 million dollars accumulated in the fund.

“The idea of the sinking fund is a very good one but when you read the budget statement because of the IMF program, the Bank of Ghana swept those balances without the ministry’s knowledge because they wanted to meet the IMF’s condition of net borrowing. That cannot happen.” He said.

“Infact as a legislator, it is illegal because we appropriate for a specific issue so if you agree with IMF you don’t go and take the money and after that they negotiate for the ministry to give them some, that is not proper policy so this is why I say there must be consistency, we intend to take the BoG on because government put it there for a reason,” Dr. Osei Akoto added.