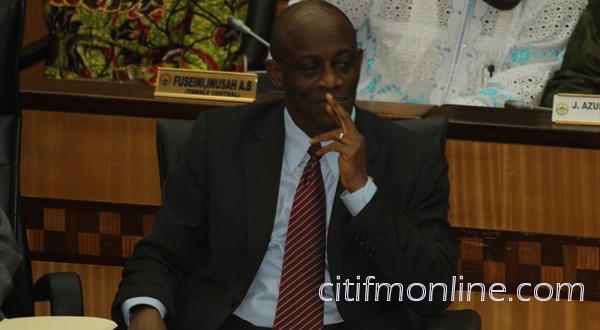 Finance Minister Seth Terkper has hinted a return to cabinet to review downwards the country’s oil revenue targets for 2016.

During his presentation of the 2016 budget statement in November, 2015, Mr Terkper said government had pegged its bench mark projection for a barrel of oil at 53.05 dollars for 2016, in line with the International Monetary Fund (IMF)’s.

But a supply glut of the commodity on the world market has since pushed its price to  32 dollars a barrel.

Earlier this year some members of the finance committee of Parliament urged the finance minister to review the projections downwards.

This will not be the first time the minister will return to parliament to slash the figure, last year Seth Tekper returned to parliament to review oil revenue projections to GH¢1.5 billion from GH¢4.2 billion in the first quarter of that year.

Speaking to Citi Business News Seth Tekper said cabinet will soon deliberate on the matter and take a decision on what figure to go for.

‘We went to parliament to give the minister the discretion, the option of using the lower figure  subject to approval by parliament so even the bench mark revenue should have been 86 dollars, we benched it at 53 dollars for the budget,  to revise it to the average of 45 will be tough but its lesser of a yeoman’s job compared with the 40 dollars.

But we are preparing these scenarios to cabinet and pretty soon  subject to their decision we will soon come out with the fiscal position in accordance, if we don’t do that you will raise expectations of ministries, departments and agencies to spend at the price of 53 dollars which does not exist’. He said.