Africa 2016: Business for Africa, Egypt and the World 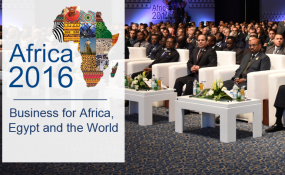 At the invitation of the President of the Arab Republic of Egypt, Abdel-Fattah El-Sisi, African Heads of State and thought leaders, investors and partners gathered in the Red Sea resort on February 20 and 21, 2016 for the “Africa 2016: Business for Africa, Egypt and the World” conference. The goal of the meeting: to accelerate private sector engagement and investment within Africa, forge new partnerships and highlight the African opportunity.

While acknowledging the economic headwinds faced by Africa, including the drop in commodity prices, the AfDB President underscored the continent’s resilience, noting that the ‘Africa rising’ narrative was far from over.

“We must not believe the narrative of doom and gloom on Africa,” he said. “Just look at the facts: while the global economy is projected by the IMF and the OECD to grow at 3% this year, Africa is projected to grow at 4.4% in 2016 and strengthen further to 5% in 2017. That is good news! African economies are not unraveling – they are resilient! Africa is still the best place to invest.”

ADVERTISEMENT
Adesina applauded Egypt and its President for an ambitious development programme. “President el-Sisi, your vision for Egypt is a bold one: you are thinking big, acting big – delivering with speed,” he said.

He then called on African countries to follow Egypt’s lead, citing the advances made on the country’s $8.2-billion Suez Canal expansion project, which was completed in just one year, and the Capital Cairo project, a plan to build a new modern capital city at the cost of $45 billion.

In 2015, the African Development Bank extended US $140 million in co-financing support to the Government of Egypt for the Sharm el Sheikh Airport Expansion Project, and approved and fully disbursed $500 million in budget support, bringing the AfDB’s active portfolio in Egypt to US $2.23 billion (32 operations).

“The message and lesson are clear,” Adesina said. “African countries should accelerate their pace of growth and development. Africa must think big, act big, and deliver big. We must never have low aspirations for Africa. The African Development Bank – your Bank – will be there to support you.”