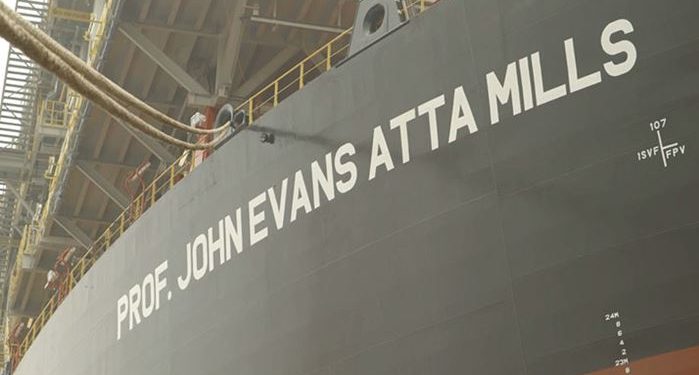 The second FPSO Professor John Evans Atta Mills, which was constructed in Singapore has finally arrived in Ghanaian waters today.

The vessel is expected to produce and store oil from Ghana’s Tweneboa-Ntomme-Enyenra (TEN) offshore oil fields.

Citi Business News gathers the FPSO Professor John Evans Atta Mills will move directly to the installation phase when it arrives on station.

With a nominal production capacity of 80,000 barrels of oil per day and a storage capacity of 1.7 million barrels, the FPSO will be attached to nine anchor piles which will maintain her position above the TEN fields, around 60 kilometers from the coast of Ghana’s Western Region.

The FPSO began its voyage from Singapore to Ghana on January 23, 2016 after it was christened by the First Lady, Lordina Mahama, in September 2015.

The vessel which is expected to start producing oil from the TEN fields by July/August 2016, will have its integrated facilities undergo final commissioning and testing during the second quarter of this year before first oil.

The FPSO Professor John Evans Atta Mills was constructed by MODEC and will be operated by MODEC Ghana Ltd on behalf of the TEN Partners.