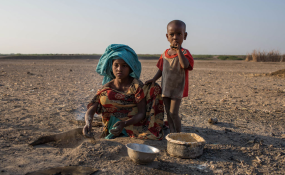 For weeks, Josamu has relied on unripened watermelons and vegetables to keep her small family alive in Chikwawa, one of the most disaster-prone areas in southern Malawi.

“When they eat the children collapse because it’s not tasty and they can’t eat enough,” the 22-year-old fretted.

“If we don’t get any help after this food finishes, our children are going to die,” Josamu said as she collected a bag of maize, cooking oil and legumes being handed out by World Vision, one of a clutch of aid groups responding to an emergency that has left 2.8 million Malawians hungry.

Almost 16 million in Southern Africa face hunger this year because of drought exacerbated by an El Nino weather pattern, but Malawi is the worst-hit country with about 17 percent of its population affected.

Prices for maize, the nation’s staple crop, are already more than 60 percent above the 3-year average for this time of the year, making it increasingly difficult for many people to buy food, the United Nations World Food Programme (WFP) says.

Last week, the government raised fuel prices partly in response to the kwacha’s weakness against the U.S. dollar. But the move is likely to push up prices for maize even more.

According to WFP, Malawi faces the highest inflation rate in the region at 23.5 percent and its kwacha currency is on average 170 percent higher than its exchange rate against the U.S. dollar compared to the same period last year.

Across Majete National Park another community living in the same district as Josamu have barely recovered from last year’s torrential rains which caused Malawi to declare half the country a disaster zone as 340,000 people were forced from their homes.

Chief Fombe said the floods ruined the land, covering it with sand. “But even if we had land today, this scorching heat would have made it impossible for us and killed every crop,” he said with a shrug.

Many of his people are suffering.

“I have never seen what I am seeing today,” she said as her daughter-in-law prepared their first and last meal of the day.

The Famine Early Warning Systems Network has said it estimates that without additional imports, supplies of subsidised maize would run out in March, about one month before the next harvest is expected to begin.

Even though Finance Minister Goodall Gondwe told parliament last month that 30,000 tonnes of maize would be imported from neighbouring Zambia and 50,000 from Tanzania, aid workers expect humanitarian needs to run high for some time.

WFP said that although climate models suggest El Nino – a warming of sea-surface temperatures in the Pacific – would fade by June, its impact would be felt for up to two years.

“El Nino events have historically always been followed by a strong La Nina,” WFP said in a report on Tuesday.

“In the Southern Africa region, this means flooding, which is as bad for production as drought, and could affect the region well into 2017.”