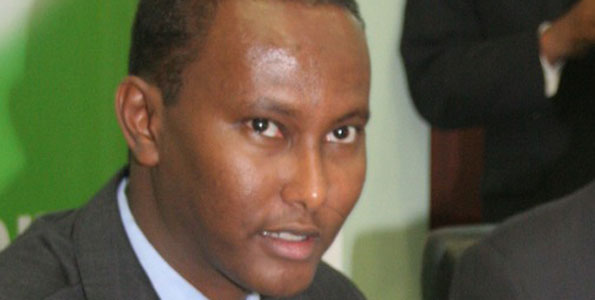 The National Bank chairman, Mohammed Hassan, has been accused of aiding a Sh100 billion money laundering scheme at one of Kenya’s largest chartered flight operators.

The allegations made in court by a founding shareholder of the Wilson Airport-based carrier have sucked Mr Hassan, a former top executive of Dyer & Blair Investment Bank, into what could shape up into one of Kenya’s most vicious boardroom wars in recent times.

Yusuf Abdi Adan, the Bluebird Aviation shareholder, has claimed in court that his partners have been using Mr Hassan to fraudulently channel massive funds out of the company as part of a scheme to sideline him and pocket his rightful share of the company’s profits.

Mr Adan has filed a petition seeking to wind up Bluebird, claiming that the other three directors have never involved him in any of the company’s affairs or paid him any dividends despite earning over $1 billion (about Sh100 billion) in its 23 years of operation.

Mr Hassan, who started off as a finance analyst at Dyer & Blair before rising to become the investment bank’s executive director, has been accused of being the conveyor belt linking Bluebird’s accounts to the pockets of Mr Hassan’s partners.

“The money Hussein Ahmed Farah, Hussein Unshur Mohammed and Mohammed Abdikadir Adan fraudulently misappropriated and used for their personal or collective use in the last 23 years is approximately between $750 million (Sh76 billion) and $1 billion.

“Due to the massive cash held by the three directors in American dollars, the company and its associates have been undertaking a massive money laundering exercise running into tens of millions of dollars.

The bulk of the money fraudulently obtained from the company is channelled through one Mohammed Hassan, the chairman of the National Bank of Kenya,” Mr Abdi says in an affidavit filed at the High Court.

Mr Adan co-founded the company in 1992 with his three partners but says he was then the only businessman in the group as the others were pilots by profession. The Bluebird co-founder’s lawyers, Ahmednasir, Abdikadir & Company Advocates, were last week told to serve the other directors with the court documents and appear before the duty judge on March 22.

Documents filed at the Milimani High Court claim that Mr Farah, Mr Unshur and Mr Abdikadir have made net earnings of $3 billion (about Sh300 billion) from Bluebird but have excluded their co-founder from the profit share.

Mr Hassan was Dyer & Blair’s executive director between 2003 and 2006, and was previously the investment bank’s general manager. He was appointed a director of NBK in 2011 and shortly after voted chairman.

Mr Adan claims his three partners at Bluebird have been running two separate books of accounts — the official one, which constitutes only five per cent of the firm’s true income, and a clandestine one which is used to hide profits made from both the government and Mr Adan.

He holds that his co-directors have spent a huge chunk of Bluebird’s funds to increase their private share portfolios in the Nairobi bourse through Dyer & Blair, but does not specify whether the stock purchases were made when Mr Hassan was still at the helm of the investment bank.

“The money misappropriated from the company is mostly stashed in foreign accounts and is for the benefit of the three directors only. The cash is being kept in safes controlled by the same three.