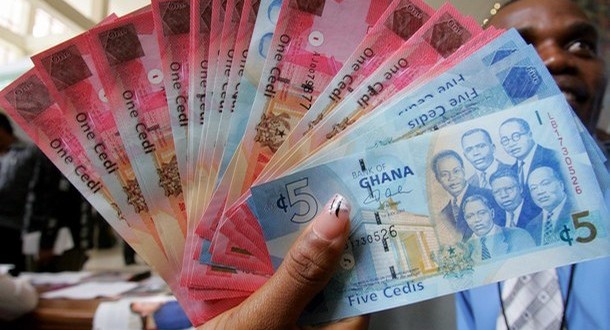 A woman holds 03 July 2007 in Accra a wad new currency, the new cedi, that Ghana put in circulation that day, although the old money will still be valid until the end of the year. Currently, the cedi is one of the least valued currencies in Africa: 9000 cedis equal one US dollar. Ernest Addison, head of research at the Bank of Ghana, assured in November 2006 that the changeover was not a revaluation nor devaluation, and will not affect foreign exchange. AFP PHOTO / ISSOUF SANOGO (Photo credit should read ISSOUF SANOGO/AFP/Getty Images)

A member of Nigeria’s central bank monetary policy committee(MPC) has said the naira should be devalued and allowed to trade within a band, saying that the fixed exchange rate would not work alongside a planned rise in government borrowing.

Adedoyin Salami, an academic, said the naira was 10-percent over-valued and voted to move the exchange rate band to plus or minus five percent from 220, minutes from the 12-member MPC January meeting showed.

Nigeria faces its worst economic crisis for decades as the falling price of oil has slashed revenues, prompting the central bank to peg the currency and introduce curbs to conserve foreign exchange reserves which have fallen to a more than 11-year low.

The naira trades some 40 percent below the official rate on the black market versus the dollar. Africa’s biggest economy grew by 2.8 percent last year, its slowest for decades.

Salami said his proposal gained no support at the meeting and that the central bank was focused on exchange rate stability at the expense of inflation.

“The absence of an exchange rate management policy has diminished Nigeria’s attractiveness as a destination for international capital flows,” he said.

Other policymakers voiced concerns that tight liquidity in the currency market could threaten economic growth this year as businesses struggle to get dollars for imports. They all voted to keep benchmark interest rate at 11 percent in January.

The central bank last year pegged its exchange rate to curb speculative demand for the dollar and conserve its dwindling foreign reserves after it restricted access to hard currency for imports of certain items, frustrating businesses.

Last month, the IMF called on Nigeria to lift the curbs imposed by the central bank in 2015 and let the naira reflect “market forces” more closely, as the restrictions had significantly affected the private sector.

However, President Muhammadu Buhari has rejected calls by the International Monetary Fund to lift foreign exchange curbs and allow a more flexible rate for the naira currency, backing the central bank’s actions.

The tight controls have forced domestic lenders to delay hard currency loan and trade repayments to foreign banks and increased the risk of default, bankers say.

Nigeria wants to borrow up to $5 billion to fund its 2016 budget deficit but the minutes showed that all 12 committee members warned that spending should not increase after the loss of vital oil revenues to curb inflation and enhance debt ratios.