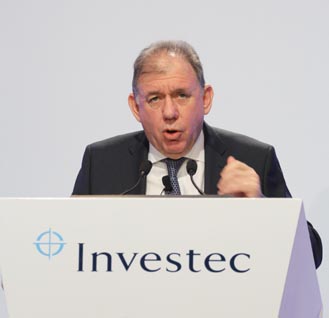 JOHANNESBURG – Business people and banks want to operate in a certain, clear environment, while South Africa needs stability and certainty as a society, says Stephen Koseff, group CEO of Investec.

“Politicians must sort their problems out. They have an obligation to the people to sort their stuff out, we need certainty and clarity,” Koseff said on Friday at Investec’s pre-close briefing, in response to a question around this week’s political developments in the country.

He said South Africa needs a decent policy framework and for the economy to grow.

Koseff’s comments come following a statement by Reserve Bank governor, Lesetja Kganyago, in which he acknowledged that political developments remained a risk to the exchange rate and had significantly impacted the rand in the past few days in particular.

Investec’s results for the 12 months to March 2016 will be impacted by rand weakness, Koseff said, which has depreciated by 17% against the pound over the period, hurting the group’s profits, as Investec’s primary listing is in London.

Expressing similar sentiments to Koseff, Kganyago stressed that a policy environment that reinforces positive sentiment towards the country will improve business confidence, which is critical to drive investment into the country.

Speaking in London at the release of results for the 11 months to February 29, Koseff said that assets under management were down 7% to £72.4 billion (R1.6 trillion, flat on a neutral currency basis), reflecting currency and equity market weakness and volatility.

This was also reflected in its wealth and investment business, where funds under management dropped 6% to £43.2 billion (R958.8 billion).

The UK specialist bank is expected to report results “substantially ahead” of the prior year, Koseff said, with the South African bank comfortably ahead in rand but behind in pounds.

Group loans and advances grew 17% on a neutral currency basis for the 11-month period, but would probably “slacken off with weakness in the South African economy”, Koseff said.

Impairments for the year to March 2016 are expected to be approximately 20% lower than the prior year, following continued progress on the UK legacy book. In South Africa, impairments will be up on the previous year in the face of weaker economic conditions, Koseff said.

“The credit loss ratio remains at the lower end of the target range for the region,” Investec said in a stock exchange filing.

Costs have increased off the back of significant investments into digital offerings – expected to launch in September this year – regulation and increased head count, both in South Africa and in the UK’s private banking business.

Investec will be launching ‘Click and Invest’ in the UK in September, Koseff told Moneyweb, which is effectively a robo advice offering. A similar offering is already available in South Africa and has “a couple hundred million” invested in it from SA clients, he said.

One Place – which enables clients to view and transact on their banking, wealth and investment products via one platform – is now also available in the UK app store.

“Overall we are positive about our current positioning and believe we are earning market share, evidenced in the growth of key earnings drivers,” Koseff said.

Approximately 71% of the group’s operating income is recurring.

“As an organisation, we’re well placed to navigate uncertainty and volatility,” he said.