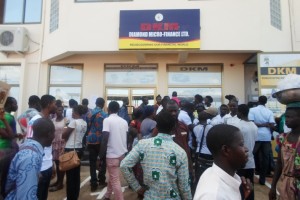 The Governor of the Bank of Ghana, Dr Henry Kofi Wampah has made it clear that the central bank cannot bailout DKM microfinance.

[contextly_sidebar id=”CddTpMTG5KqdP73hKXcz3FOxrbaaGe6m”]According to the Governor, the central bank has begun the liquidation process with the registrar general’s department which makes it impossible for a bailout of the microfinance company.

Some Members of Parliament have asked the central bank to rather consider a bailout for DKM instead of liquidating the assets of the company to pay off depositors funds.

Their demands follow the delay in the payment of locked up investments by embattled DKM Microfinance Company.

But the Governor of the Bank of Ghana, Dr. Henry Kofi Wampah responding to the calls for a bailout said there is currently a forensic audit ongoing on DKM.

‘‘On the microfinance bail out, now you cannot bail out the company which is under liquidation. We have revoked the license of DKM and now the process of liquidation has started and that starts with a forensic audit which has been commissioned.”

“We are working with the Registrar General’s department on that process and the process will ensure that we do everything. Whatever we do will be within the laws because our legal people will look at any action we need to take.”Dr  Wampah stated.