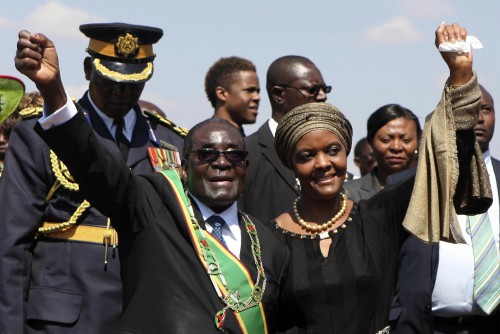 Zimbabwe plans to start compensating mainly white farmers who lost their land and livelihoods during state-backed farm invasions that began in 2000 and triggered a near decade-long recession, the Finance Ministry said in a circular distributed to lawmakers.

Farmers may be compensated for “both land and improvements,” as well as equipment acquired by the state during the often violent seizure of property, according to the document submitted to parliament on Tuesday. If approved by the government, it would mark a major shift in policy. President Robert Mugabe previously said payments would be made only for investments in infrastructure such as dams, roads and buildings on seized farms.

“This may be the result of pressure, not only locally but also internationally,” said Willie Spies, the legal representative for South African civil rights group AfriForum, which won a lawsuit last year to expropriate Zimbabwean government property in South Africa to compensate farmers whose land was seized. “Economic realities might have convinced the government to change their ways.”
IMF Talks

The ministry’s plan to set up a Lands Compensation Fund comes as the government is seeking to restore relations with the International Monetary Fund and western donors and kick start growth in an economy that’s half the size it was in 2000. Finance Minister Patrick Chinamasa has said Zimbabwe is ready to pay lenders such as the IMF, World Bank and African Development Bank about $1.8 billion in debt and hopes the Washington-based fund will resume lending to the southern African nation this year. Chinamasa declined Wednesday to comment on the circular.

Zimbabwe has met the targets in the final review of the IMF’s staff-monitored program, the head of the fund’s mission in the country, Domenico Fanizza, told reporters Wednesday in the capital, Harare.

“This means that as we go forward we are now negotiating a country-financing program,” Chinamasa said at the same briefing.

Previously, Mugabe has said that farmers would not be compensated because the land had been stolen from the black majority during colonial rule. The invasions decimated production of tobacco, once Zimbabwe’s biggest export, and caused famines in a country that was once Africa’s second-biggest corn exporter. They also came at a time when Mugabe was facing his biggest ever challenge from the political opposition and the seizures bolstered his support in rural areas.
Colonial Rule

During colonial rule black subsistence farmers were forced onto infertile areas while the best land was reserved for white farmers, of which there were about 4,000 in 2000.

The Lands Compensation Fund will be financed by rents and levies charged to the new occupants of the former large-scale farms, “development partners” and donations, the Finance Ministry said. It didn’t say how compensation would be calculated or what former farm-owners might expect to be paid.

“The farmers have lost everything,” Spies, who hadn’t seen the Finance Ministry document, said by phone from Pretoria, South Africa’s capital. “Up to now, the undertakings that were given for compensation were only for improvements and implements. If they added land to the equation it could be a breakthrough. I say this cautiously. We shouldn’t celebrate until it actually happens. ”