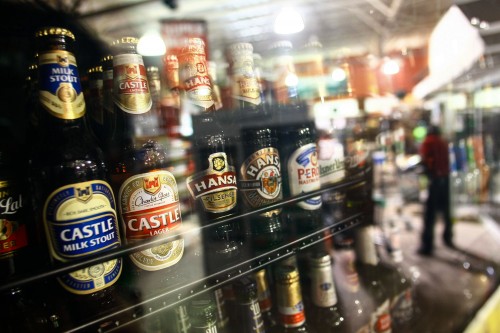 Of all the countries whose regulators need to approve Anheuser-Busch InBev NV’s purchase of SABMiller, only one is flirting with a potential junk-bond rating.

It’s South Africa. The country’s troubles, from a gyrating currency to a flip-flopping government, may be good news for the maker of Budweiser as President Jacob Zuma tries to restore good relations with business. The policy reversal should bode well for merger approval in a country where getting a signoff for previous deals has run behind schedule and included jobs concessions for unions.

“South Africa is in a very delicate position and needs to be cautious about the messages its sends to international business,” said David Shapiro, a director at Johannesburg-based Sasfin Securities. “Long delays in approving this deal won’t win the country any friends. Since December it’s looking very different.”

It was in December that Zuma appointed two finance ministers in four days, which rocked the local markets. As the economy hovers near recession and a credit-rating downgrade to near junk looms, investors are still concerned about stability at the National Treasury amid what is seen as a power struggle between Zuma and Finance Minister Pravin Gordhan.

In Europe, China and the US, the beer companies are divesting a range of assets tosmooth the path toward regulatory approval.

In South Africa, it took 18 months for Wal Mart Stores  to gain approval to buy Johannesburg-based Massmart Holdings. The world’s largest retailer also had to set up a supplier-support fund worth as much as R200 million ($12.5 million). SABMiller itself is still waiting for approval to merge its African soft-drink bottling assets, 15 months after it filed the request.

South Africa’s initial regulatory phase for AB InBev-SABMiller has already taken longer than the 40 days the Competition Commission sets for a large merger, spokesman Itumeleng Lesofe said by phone. The transaction was filed with the regulator on Dec. 14 and the commission has had to get consent from the companies for an extension, he said. The commission will then give its recommendation to the Competition Tribunal, which will make the decision on whether to allow the deal. Depending on the outcome, the parties involved may take the decision to the Competition Appeal Court in Cape Town.

“While anything is possible in terms of delays in the regulatory approvals, South Africa needs to tread very carefully since December,” Asief Mohamed, chief investment officer of Aeon Investment Management, which oversees about R2.3 billion of assets, said from Cape Town.

The Congress of South African Trade Unions, the nation’s largest labor federation and an ally of the ruling African National Congress, wants assurances that jobs will not be lost.

“Our concern is looking at how AB InBev has operated. They are known for penny pinching, for outsourcing and cutting jobs,” said Sizwe Pamla, the federation’s spokesman. SABMiller, which has its roots in the 19th century as a brewer for thirsty South African gold miners, “was built by the workers of this country.”

The Public Investment Corp., based in Pretoria and owned by the South African government, has said it’s in talks with AB InBev about its concerns over suppliers, especially in the area of agriculture. Economic Development Minister Ebrahim Patel and Trade and Industry Minister Rob Davies, who asked for conditions on the Wal-Mart deal, said they would not comment at this stage.

AB InBev started trading its shares on Johannesburg’s stock exchange on Jan. 15, easing one of the PIC’s biggest concerns. The brewer listed on Africa’s biggest equity market through a fast-track process that took 21 days to complete once talks started. That demonstrates AB InBev’s commitment to South Africa and the rest of the continent, which was critical to the combination with SABMiller, CEO Carlos Brito said. It also paves the way for the listing of the merged company once the transaction is completed.

“The PIC seem to have been one of the loudest objectors so far, and it seems happier now,” Jonathan Fyfe, an analyst at Mirabaud, said after the Johannesburg listing. “We’ve got to assume AB InBev will do whatever it takes to get this deal over the line.”